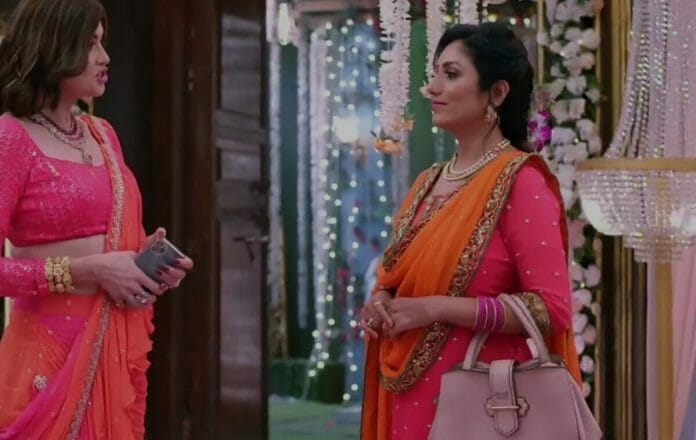 Zee TV popular show Bhagya Lakshmi is attracting viewers with an interesting storyline where Shalu warns Lakshmi has glued the audience to the screens.

As reported earlier Malishka sees Lakshmi smiling to herself and decides to spoil her mood saying she will not get Rishi. Lakshmi tries to leave from there but Malishka stops Lakshmi. Lakshmi warns Malishka. Malishka gets angry and tries to break Rishi and Lakshmi’s photo.

Lakshmi stops Malishka and says she can’t separate them even in a photo. Malishka leaves from there. Kiran advises Malishka that she has to break Lakshmi’s fast. Malishka asks how can she do that. Kiran tells Malishka how to do that.

Shalu calls Lakshmi and asks her to be careful. Rishi overhears Shalu and Lakshmi talking on the phone about her mother. After the call, Rishi asks Lakshmi to tell him something about her Dad.

Lakshmi gets emotional talking about her Dad. Rishi comforts Lakshmi. Sonia sees this and leaves from there. Sonia asks Malishka to leave the house and tells Malishka what she saw.

Sonia reminds Malishka of how she used to be and how she is now. Malishka agrees and shares her plan with Sonia on what she wants to do to Lakshmi. Rishi cheers up Lakshmi by teasing her.

In the upcoming episode, viewers going to witness Karishma will ask Rano if Lakshmi will be able to do the fast. Rano says Lakshmi will do anything for Rishi. Shalu and Ayush will fall on the bed. Rano comes there and notices them. Later Malishka will say to Sonia that Lakshmi is becoming Savitri by keeping the fast, now see how these people will ram Lakshmi under their feet.

Malishka will say this bottle will do her work. Malishka applies the bottle of medicine that she brought on Lakshmi’s lips who is sleeping. Shalu comes to Lakshmi’s room.

Can Malishka get successful in her plan? Who will save Lakshmi from Malishka’s conspiracy?
All these questions will be answered in the upcoming episodes.