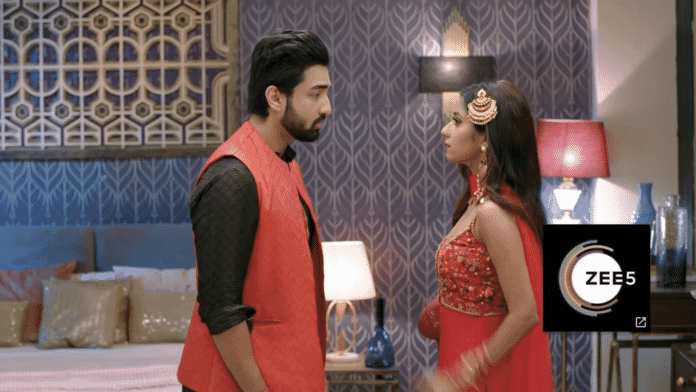 As reported earlier Rishi and Malishka made eachother jealous using Viraj and Lakshmi. Malishka felt insecure seeing Rishi dance with Lakshmi than at end of dance Malishka said it’s punjabi theme so dance can’t be closed without Fukdi and she asked Lakshmi to compete with her than both holded their hands and spins fastly but Malishka left her hands in the middle. Rishi saved Lakshmi on time and Ayush looks angrily at her than he warned Malishka in message. Malishka apologized to Lakshmi for her mistake. Dadaji makes an announcement that he along with Abhay decided that Viraj’s roka will happen with Malishka day after tomorrow. Everyone got shocked. Malishka told to Viraj that she won’t marry him. Viraj went to talk with his Grandfather.

In the upcoming episode viewers gonna witness that Dada ji tells to Lakshmi that he has seen what others haven’t seen. Malishka promise to Rishi that she will call off her marriage with Viraj if he breaks his marriage with Lakshmi. Dada ji tells to Abhay that Lakshmi will not care for her life to save someone but she will never accept lie and betrayal from others so nothing wrong will happen with her. Rishi agrees to Malishka’s demand and tell her he is ready to marry her now itself. Malishka hugs him. Lakshmi comes there.

Will Rishi divorce Lakshmi? Will Lakshmi find about Rishi’s affair with Malishka?