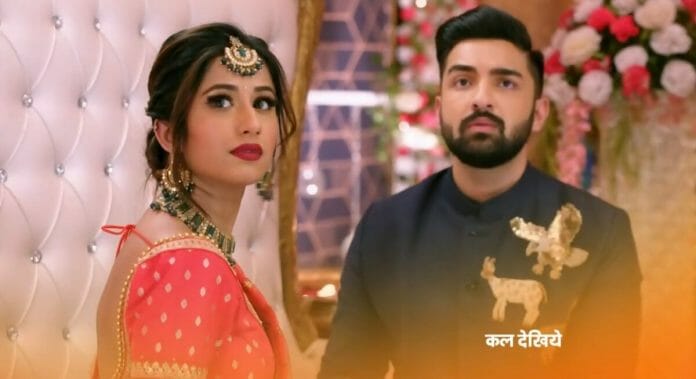 Zee TV popular show Bhagya Lakshmi is attracting viewers with an interesting storyline, Lakshmi saves Malishka has glued the audience to the screens.
As reported earlier, Rishi stops Lakshmi from talking about their relationship and takes Malishka with him. Later Malishka asks Lakshmi to wear the dress. Malishka and Lakshmi come in the same dress and says Lakshmi will dance at my party. Lakshmi and Malishka dance at the party. During the dance, Lakshmi saves Malishka from getting hurt but gets hurts herself. Everybody takes Malishka away but nobody gives her attention. Balwinder goes near Lakshmi’s room but he leaves seeing Shalu. Lakshmi cries over Rishi’s behavior towards her.

Malishka tells them she is fine. Rishi leaves the room. Neelam says Rishi looks worried and whether it’s for Lakshmi. Malishka says he doesn’t care about Lakshmi anymore. Rishi goes to his room Nd does first aid to Lakshmi. Malishka witnesses it in shock.
In the upcoming episode, viewers going to witness Bani will tell Shalu that Lakshmi will be broken if Rishi gets married to Malishka. Shalu will tell Malishka that you shall thank me as I was the one who gave information to reporters. She will ask Rishi to know from your heart whether your wife can ever do it.

Malishka will ask Rishi if he will go back to Lakshmi if she is innocent. Rishi will say yes. Lakshmi will tell Shalu that she doesn’t want to get separated from Rishi. Shalu will ask her to confess her love to Rishi then Rishi will come to you canceling his engagement. Lakshmi will come running and sees Rishi and Malishka sitting for engagement.
Can Lakshmi be able to confess her love? Can Lakshmi save Rishi from Balwinder?
All these questions will be answered in the upcoming episodes.