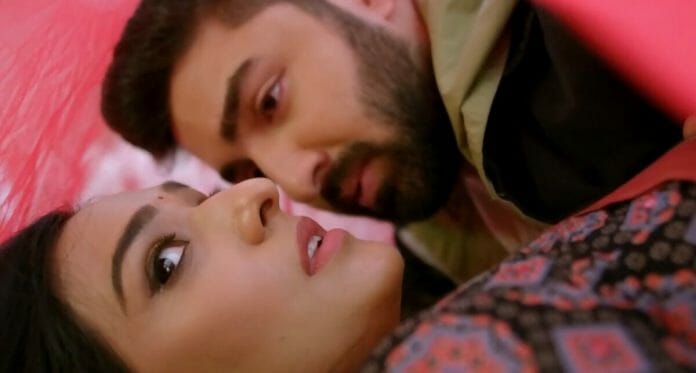 The episode starts with Kiran says I never thought that this will happen to my daughter because of your daughter in law. Neelam says, she is not our daughter in law. Lakshmi tries to tell them she didn’t know anything about the article. Neelam scolds her. Rishi stops Neelam and asks them to give one chance to Lakshmi for an explanation. Karishma asks why he is taking her side? She may ruin our reputation too. Rishi says, I never thought that Lakshmi can think something like this, but whatever is written in a newspaper is true. Ayush calls Rishi for the meeting. He leaves with Ayush. Neelam goes to handle it. Sonia asks Karishma who might leak the secret of their house.

Shalu tells Malishka that she gave full information to the media listening to her conversation with reporters. Malishka gets angry. Shalu says girls like you disrespect other girls and defame them. Malishka shouts at her and tries to slap her. Lakshmi stops Malishka’s hand and tells her that she won’t bear it if she does anything wrong with her family members. Malishka says Shalu crossed her limits. Lakshmi says you did a mistake and I’m proud of Shalu and thank my sister as she didn’t reveal the full truth about you. Malishka leaves telling her that she makes her feel regret. Shalu hugs Lakshmi. Lakshmi asks why you did it.

Lakshmi tells Shalu that she did wrong. Shalu says Rishi is your husband and we have to do something to shut these people. Malishka says I’ll defame her to an extent that she cannot think of it. She asks Neelam’s permission. Neelam gives her permission and asks her to break the proudness of Lakshmi. Kiran asks what’s she planning to do. Malishka leaves asking them to come when they hear shouts. Lakshmi says I need to stay here for Rishi’s safety and that’s what I needed and I don’t want to fight with anyone as I know that it’s wrong to keep wrong hopes.

Malishka’s father calls Virendra and asks if he saw the Today news paper. Virendra denies. Malishka’s father asks him to read to know where happening. Virendra reads papers. He calls the reporter and asks who gave him information about their family. The reporter says Lakshmi and his phone fall down. Rishi and Ayush come there and hears it. Virendra leaves asking them to hear attend the Juneja meeting. The reporter calls Virendra’s landline but Ayush disconnects the call saying he is not there. Rishi feels bad for supporting Lakshmi who tried to defame them.

Women welfare people come to Oberoi mansion. Krishna tries to call the police. Ladies show their welfare proof to Neelam. Neelam stops Karishma. Ladies ask Neelam what she did to save the relationship between Lakshmi and Rishi. Kiran says their relationship is about to end. Ladies ask who’s she. Dadi says she is the Mom of Malishka. Ladies ask Dadi why she didn’t try to save Rishi’s relationship. Malishka asks who are they to question them. She tells them she will marry Rishi and throws out Lakshmi from their life.

Precap – Welfare women darkness the face of Lakshmi. Neelam tells Lakshmi that she is a curse to their family. Lakshmi senses the danger.