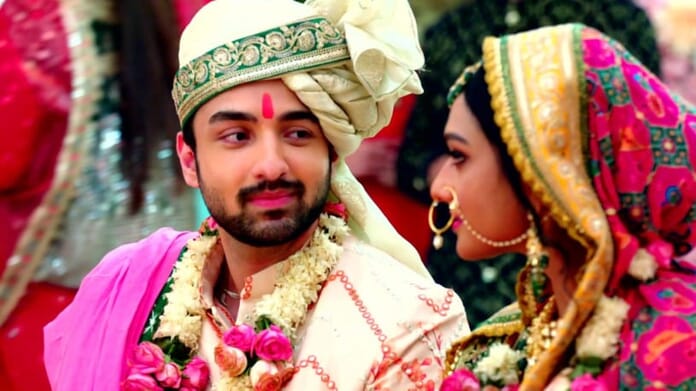 The episode starts with Neelam saved Rishi from fire accident and when we informed it to Astrologer he asked for Lakshmi kundli and I realised that she is the one who can save our Rishi from his kundli Dosh.

Rishi comes to Lakshmi’s room to see her condition and he reminsces how she risked her life to save him and he calls Lakshmi but she couldn’t gain conscious than he holds her hand and thanks her for saving him. Nurse comes to Rishi and asks if he is fine. Rishi says I’m fine, what about Lakshmi. Nurse says she too asked us about you and she gained conscious for you and she was running to see you and we tried to stop her and she felt worried seeing her sindoor wiped out from Maang than we have her second dose of Anesthesia and Nurse asks him to fill her maang or else she will be worried again when she get up than Rishi fills Lakshmi’s maang with sindoor.

Doctor asks Nurse to get wheel chair to take Rishi to his room and he tells to Rishi that Lakshmi saved him. Rishi looks at emotionally. Nurses takes him to his room in wheelchair. Neelam says it’s Lakshmi kundli which Astrologer is searching. Virendra says Balwinder throwed the Kundali than i sent that kundali to you by clicking photos and Astrologer said she is the powerfull girl who can eliminate Markesh dosh of Rishi but he said Lakshmi had to marry Rishi with love to save him. Virendra says I implemented everything according to our plan. Neelam says Lakshmi again saved our Rishi. Dadi says Lakshmi saved us too because Rishi is our life.

Virendra and Neelam, Ayush and Dadi goes to meet Lakshmi. Sonia tells to Karishma that she is thinking about her. Karishma says they have to inform her than Sonia asks what if she comes here. Karishma says, so what and she calls to that person.

Neelam sees Lakshmi through door and she thanks Lakshmi than she thanks Virendra for marrying Lakshmi to their son. Virendra feels emotional reminscing Lakshmi words. Nurse makes Rishi sleep in bed than Rishi thinks who can sacrifice their life for others like Lakshmi. Lakshmi wakesup calling Rishi. Nurse says you guys are same and your husband loves you that’s why he came to meet you like you want to meet him and you’re lucky to get him. Lakshmi asks if he is fine. Nurse says you guys won’t let anything happens to eachother and she shows her Maang and tells her that Rishi filled her maang. Lakshmi feels happy and she asks can she meet Rishi. Nurse agrees and tells her Rishi room number. Lakshmi goes to meet him.

Rishi’s girlfriend arrives to Rishi room and she hugs Rishi saying she loves him so much. Virendra and Neelam notices them through mirror. Rishi girlfriend tells him that she can’t live without him than she asks why he is silent and asks him to tell something. On the way Lakshmi thinks I thought Rishi is changed but he loves me alot.

Rishi tells to Malishka that he loves her. Malishka tells him she loves her too. Neelam and Virendra goes to Rishi room and tells him that it’s wrong. Rishi says you guys did wrong with me even after knowing how much I love Malishka. Malishka says they are doing this for you and that’s why I accepted it. Neelam asks him to relax and questions how’s he. Rishi says he is fine. Malishka says sorry aunty, I couldn’t control myself after knowing Rishi condition. Neelam says you have to wait because she is married. Virendra says Lakshmi will be broken if she finds about it. Karishma happily meets Rishi and Malishka. Malishka thanks her for informing her. Sonia asks if Rishi is happy. Rishi says he is happy. Virendra goes to meet Lakshmi. Neelam says Lakshmi is saving you from Markesh dosh. Ayush says Lakshmi is life saver. Rishi says he wants to end his marriage with lakshmi as soon as possible to marry Malishka. Lakshmi’s black beads chain gets broken which shocks her.