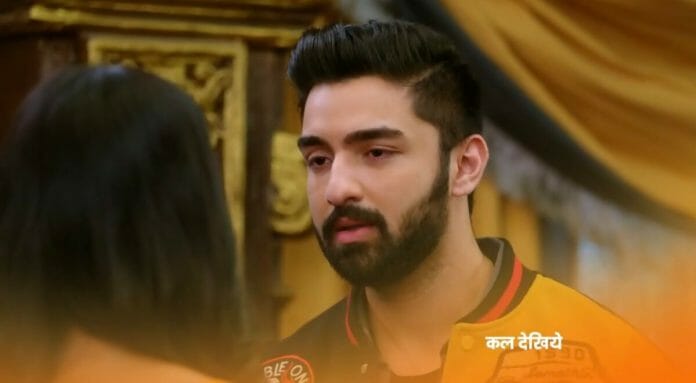 The episode starts with Pandit Ji saying the auspicious time has gone but there is no need to worry as there is an auspicious time after 20 min. Rishi says there is 20 min let’s celebrate and dance. Everyone starts dancing for the song. Lakshmi wants to leave but Rishi doesn’t let her and forces her on the dance floor he does it again and Lakshmi dances with him and leaves upstairs. Shalu tries to go after her. Neelam stops her and says she is not allowed and says she doesn’t want her and Lakshmi to create another problem. Shalu asks what did they create. Neelam asks how she fell as nothing like this happened before. Neelam says she fell because of Lakshmi and says it may not be her plan to fall me but she planned to make fall some family member.

Malishka says she will bring Lakshmi and she goes to Lakshmi. Malishka asks her to come downstairs to see the engagement. Lakshmi says this is not an engagement this is just a party and if you really want to show it then I will come downstairs. Lakshmi comes downstairs with Malishka. Pandit Ji asks Malishka and Rishi to put the rings but Rishi sees that there is no ring in the box and everyone starts blaming Lakshmi. Lakshmi says she has no ring but no one believes her and asks her to bring the ring. Lakshmi says she will find the ring to prove her innocence and Virendra says everyone will search for the ring.

Balwindar admires the ring. Bobby tells him to hide it. Balwindar says he stole it putting his life on the line so let me admire it. Balwindar puts it away. Bobby asks the ring as he has no use for it. Balwindar doesn’t give him the ring. Balwindar thinks of killing Rishi. Rishi comes there but Balwindar and Bobby hid from him. Bobby sees that Balwindar is sweating and comments on him. Balwindar says he is looking for an opportunity to finish him. Lakshmi is shown to be searching for the ring. Shalu stops her and asks what is she doing. Lakshmi says she is searching and she is doing it because they think that I stole the ring. Shalu tries to stop her but Lakshmi explains her point of view. Lakshmi says I consider them as my family and they think that I’m the one who hid it but why will I do it and they have to understand that this engagement is wrong and they have to stop it but they are not and leave it as there is a law above. She searches for the ring. Shalu leaves thinking she will do her work.

Balwinder tries to attack Rishi with a knife. Rishi makes him drop the knife but Balwinder takes it. Lakshmi enters the room and says Rishi. She helps Rishi to catch Balwinder but Balwinder escapes from there. Lakshmi says he is a thief and who might have stolen the ring. They go out to catch him. Lakshmi asks Ayush to catch him. Ayush follows him. Malishka sees Balwinder. He tells her he came to separate Lakshmi and Rishi, that’s why steal the ring. Malishka acts like he is taking her to a room. She tells him it’s her engagement ring. Rishi and Ayush break the door and enter inside. They release Malishka who is tied up. Balwinder recalls how Malishka helped him as she doesn’t want the engagement to cancel because of the police case. Balwinder leaves the room without their knowledge.

Rishi asks if she is fine. Malishka says Lakshmi is right and that thief stole our engagement rings. She shows them rings and hugs him. Rishi stops Lakshmi from leaving and thanks to her for helping Malishka. Malishka hugs Lakshmi and asks her to forgive her for accusing her wrongly in a wicked way. Lakshmi looks on. Rishi says the girl must be like Malishka who apologised after realizing her mistake but you’re not replying as you’re full of ego. Ayush asks Lakshmi to say it’s ok. Lakshmi says she can’t prove herself every time and her it’s ok doesn’t matter. She leaves. Malishka asks Rishi to not spoil the day as it’s our important day and Lakshmi is not happy with our engagement and she wants to stop it. Rishi says she can’t stop it. He asks Ayush to not inform anyone about the thief. Ayush agrees. Lakshmi sees Virendra and thinks you have to save Rishi from Malishka Bauji as she is not good and I saw her wicked face. Lakshmi tries to talk with Virendra. Neelam comes there. Lakshmi tells she wants to tell something.