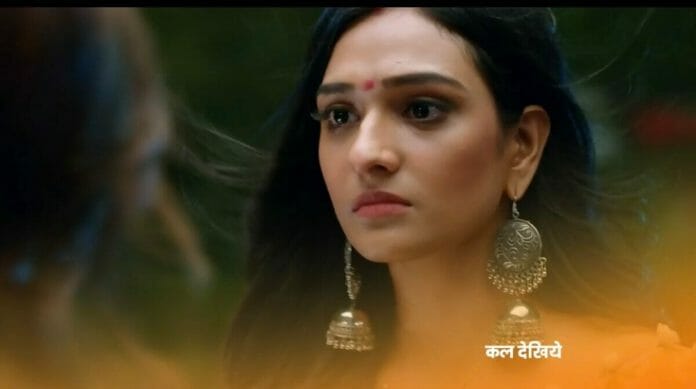 The episode starts with Rishi saying that he doesn’t care about her. Lakshmi sees a car is coming and calls for Rishi but he doesn’t listen and Lakshmi pulls and saves Rishi from it. Lakshmi starts scolding him. Lakshmi says you might not care about me but I care about you. I thought you are mine not only in this life but for seven lives. Karishma and Ayush praise Malishka and her dress. Malishka asks where is Rishi. Neelam says if Rishi came there will be another celebrations as Lakshmi will leave the house.

Dadi says she doesn’t care who leaves. She just wants to dance. Virendra asks where is Ahana. Ahana comes wearing a saree of Lakshmi’s. Karishma asks what did she wear and points out You wore Lakshmi’s saree. Neelam asks today is your engagement why are you wearing Lakshmi’s saree. Ahana says this is the reason she wore as it is my engagement. I want to be simple and not to showy.

Malishka starts berating Lakshmi and says she is a hypocrite. Ahana shouts at Malishka and she says to stop it and she will not hear it from her and you are not even our family member. Karishma says Lakshmi is a stain on our family. Ahana thinks she wish she can tell the truth then she will know what Lakshmi did. Neelam says now Lakshmi’s relationship with this house is going to be over. Ahana asks her mom for the phone to contact Lakshmi.Neelam thinks Lakshmi is turning Ahana against us. Ayush thinks there is something going on. Lakshmi calls Ahana. Ahana says she will go in and call. Rishi thinks of what happened with Lakshmi. Lakshmi thinks the truth should be out before they enter the court.

Rishi says he forgot the file and he will bring it. Ahana tries to call Lakshmi but her phone is switched off. Karishma asks what happened why is she worried. Karishma says if she is not happy with Gautham she can tell them. Ahana says everything is fine with Gautham. Karishma says she doesn’t need to worry everything will be alright after the marriage. Ahana gets vomiting and goes to the washroom and Karishma checks her phone and she sees that she is making a lot of calls for Lakshmi.

Karishma asks what is going on and why is she vomiting. Ahana says she went with Gautham to eat fries and it disturbed her stomach. Ahana sees that Gautham parents came and thinks that Gautham told the truth to them and they still came here. Gautham came after Gautam parents.

Dadi says she can dance today well in the engagement. Virendra and Karishma comment on her. Neelam calls Mukesh to serve them food. Mrs Gujral asks did Lakshmi not make the food. Mr Gujral says this is not Lakshmi’s food I can tell it with guarantee as her food is magic. Karishma says Ahana is a little tensed when Mrs Gujral asked for her. Ahana enters and takes blessings of Mr and Mrs Gujral. Ahana and Gautham sit side by side. Sonia tells them to smile a little. Lakshmi and Rishi come to the Judge. Judge asked if they talked about anything. Rishi says there is nothing to talk about. Judge says good then my decision will be easy to make.