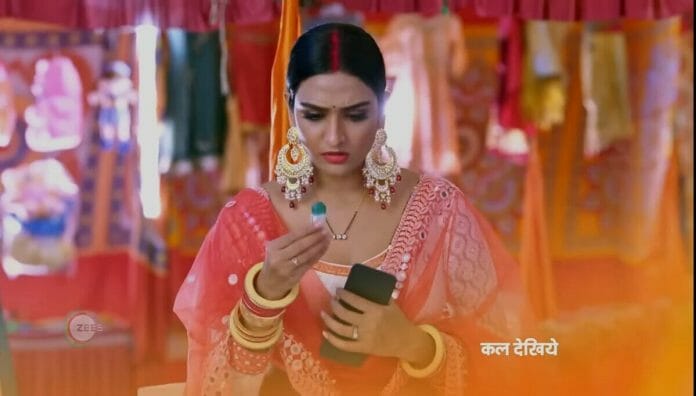 The episode starts with Malishka asking Sonia how is she so sure that Lakshmi ate the food. Sonia says she saw Lakshmi take a plate of food. Malishka says to Sonia that she needs to show proof. Sonia says the plate should still be in the room. Neelam says if what she said isn’t right then it will be bad for her. Sonia asks if what she said is true what will happen? Neelam says then it will not be right for Lakshmi.

Shalu thinks of taking the plate to the kitchen and goes to the room to get it. Neelam sees Shalu holding the plate in Lakshmi’s room.

Neelam asks Shalu what is she doing here? Shalu says she is taking away the plate as if it is left here ants might come. Sonia comments on what she said. Neelam stops Sonia. Neelam says Shalu to leave. Shalu leaves from there. Sonia asks Neelam why did she allow Shalu to leave? Neelam says we came here to find out the truth about Lakshmi. Sonia asks Neelam now she saw the proof and what is she going to do?

Ayush apologises to Rishi and also asks where is he going? Rishi says there is an important meeting in the office and he is going for it and leaves in the car. Rano gives Shagun to Ayush. Ayush asks why did she give him Shagun? Rano says when we like a guy we book them by giving Shagun. Ayush returns the money and says he is not interested in Shalu. Rano says she is talking about Neha. Ayush apologises and says he doesn’t like Neha also. Ayush tries to leave from there. Rano sees Simmi and her daughter and asks Ayush to stay away from Simmi. Simmi introduces her daughter to Ayush. Ayush says he has a girlfriend and leaves from there.

Neelam shouts at Lakshmi and questions her on why did she break the fast? Lakshmi says she didn’t do anything like that. Neelam asks Lakshmi then whose plate is in her room? Lakshmi says it might be Rishi’s. Rishi looks for his phone and thinks it is with Ayush. Kiran and everyone blame Lakshmi for breaking the fast. Shalu intervenes and tells Lakshmi to call Rishi. Lakshmi calls Rishi but Ayush picks it up and says Rishi’s phone is with him. Lakshmi says to Neelam that Rishi’s phone is with Ayush. Neelam says to Lakhsmi that she proves again and again that she is inauspicious for their family. Ayush comes and asks everyone what is going on? Shalu says everyone is thinking Lakshmi broke the fast. Ayush says she would never do anything like that and defends Lakshmi. Lakshmi falls unconscious.

Sonia says Lakshmi is acting. Harleen slaps Sonia for speaking ill of Lakshmi. Rishi comes and sees Lakshmi unconscious. Rishi asks everyone what happened? Shalu says everyone thinks Lakshmi broke the fast seeing the plate that you ate. Rishi says he is the one that ate the food and says Lakshmi is unconscious because she is doing the fast for him. Rishi defends Lakshmi saying he is alive because of Lakshmi. Rishi brings Lakshmi to the room. Ayush calls the doctor. Rishi sprinkles water on Lakshmi. Lakshmi wakes up. Ayush leaves the room to give some privacy to Lakshmi and Rishi. Lakshmi asks Rishi if the pooja stopped because of her falling unconscious. Rishi asks Lakshmi if she recalls why did she fall unconscious? Lakshmi recalls what happened. Rishi asks Lakshmi why does she do fast? Lakshmi says because she likes caring for him. Rishi says she forgets caring for herself. Rishi also says he also cares for her.