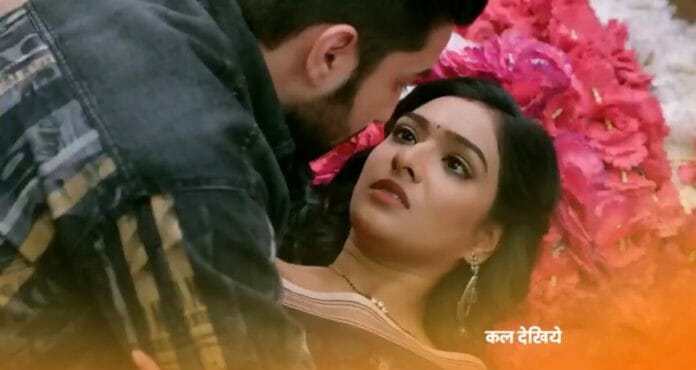 The episode starts with Shalu going to Balwindar and asks him how dare he come into the Oberoi house and steal the ring. Shalu warns him to stay away from his sister. Balwindar asks her if she forgot what happened on holi. Shalu asks him if he forgot what happened afterwards. Balwindar says he loves Lakshmi and everything is fare. Shalu says it’s not love but obsession for her. Balwindar says her to call him jiju and you are saali that’s why I am listening to you.Shalu warns him again to stay from her sister. If he doesn’t he will call the police and say to them that he is here. Balwindar asks if she is blackmailing him. Shalu says for people like you we have to blackmail. Shalu leaves. Neha asks what kind of Bhai he is as she spit in you and leaves and you can’t do anything.

Ahana and Virendra bring Dadi to her bed. Ahana says she will sleep with Dadi today. Virendra agrees. Dadi says there is no need she only got dizzy for a while. If you stay like this I will get dizzy again. Dadi teases Ahana about marriage and Ahana leaves seeing that she is fine. Virendra asks why does she tease Ahana like this. Dadi says she finds it interesting and by doing this she feels young. Virendra tells her to take rest and tells find a new target tomorrow to tease. Virendra and Dadi talk about Lakshmi.

Rishi comes to Lakshmi and asks if she is celebrating as she won. Lakshmi asks if Malishka said to him how she feels. Rishi asks she better watch her tone. Lakshmi says sorry if he doesn’t like her tone. Lakshmi asks if she looks like she is angry then what is he going to say. Rishi says there is no need to say to her anything. Lakshmi gies to Rishi and wipes the place Malishka Kisses. Rishi asks her if she feels uncomfortable as Malishka kissed him. Lakshmi says he doesn’t care so why is he asking if she is feeling uncomfortable or not. Rishi asks why is talking like you are the victim we are the victims because of you. Lakshmi says she saved them by herself becoming the laughing stock. Rishi asks why did she do it. Lakshmi doesn’t answer. Rishi holds her hand and forces her to answer.

Malishka and her family come to their house. The servants prepare a cake as congratulations for the engagement and ask Malishka to cut the cake. Malishka throws the cake away and says to stay in thier limits. If they don’t she threatens to fire them. Malishka leaves and Abhay explains to the servants that she is angry because the engagement did not happen. Kiran says to the servants to clean the cake. Abhay says to Kiran to take care of Malishka.

Rishi forces Lakshmi to answer and says you will not say because you want to show what you can do and you need to show that you are a savior and I know you would have said to the judge that everything is happening because of me. Lakshmi asks if he thinks her about like this. Rishi says if you want to see me happy then you need to let the engagement happen. Lakshmi says I was just doing that I once thought of stopping the engagement but after seeing you I was silent. Lakshmi says but you can’t see what is happening if you did then you will call off the engagement. Lakshmi said she should have called the judge but not Shalu.

What Shalu did is right and you may stop it if I told you. He gets the call. Rishi receives Malishka’s call. She tells him she missed him. Lakshmi disconnects the call telling her she is talking important matter to her husband. Rishi asks what she did. Malishka calls him again. Lakshmi picks up the call and says seems like you didn’t understand Hindi and she tells the same thing in Punjabi. Malishka calls him again but the phone doesn’t get connected. She thinks to visit Rishi’s place.

Lakshmi hides Rishi’s phone in the kitchen. Rishi asks her to give him his phone. She refuses. She asks him to promise her that he will talk with her in a good way and behaves better with her. Rishi snatches his phone and dumps it in the water and he tells he is the one who keeps conditions and relationships will happen from the heart, not with these conditions. Rishi goes to Ayush’s room and calls Malishka through Ayush’s phone. Malishka attends the call and asks why he is calling from Ayush’s number. Rishi asks her to call Ayush’s number if anything is urgent until he gets his new phone. Malishka agrees. Rishi asks Ayush to order him a new phone and he has to get it in the morning. Ayush says leave from here Lakshmi then everyone will feel happy. Lakshmi hears his words.