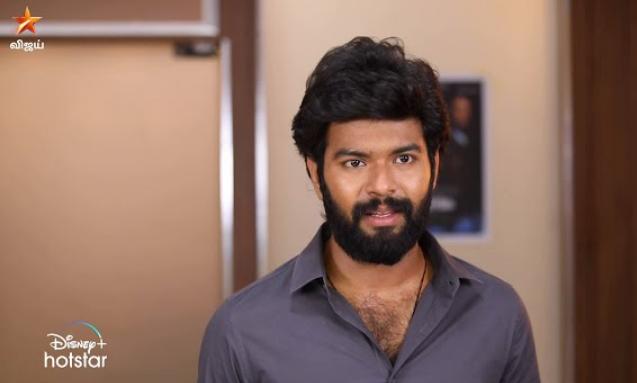 Vijay Tv’s popular show Bhagyalakshmi never fails to entertain the audience with its engaging yet progressive storyline. Now the serial focuses on Gopi’s decision to sell his home. Will Ezhil win the challenge?

In the previous episode, Ezhil challenged Gopi that he will get his home back. Ramamoorthy lashed out at Gopi for his decision. Eshwari met Varshini to share Ezhil’s problem. Ezhil decided to sell his script to a new producer to get money.
Varshini learned about Ezhil’s situation from Eshwari. Ezhil informed the family about his arrangement to get money.

In today’s episode, Jeny tells Cheiyan to help Ezhil financially. Cherian is not ready to help. Bakkiya comforts the devasted Jeny. Ezhil and Sathish meet the produce to hand over his scripts. Ezhil is in a tight spit when he asks for an old script from Vashini’s father.

Sathish and Ezhil get an appointment to meet Vashini’s father. Ezhil meets Vashini’s father to get the script. He puts conditions Ezhil to solve his problem. Ezhil refuses to marry Vashini.

Will Cheiyan help Ezhil? Will Ezhil win the challenge? How will Ezhil arrange money? Will Ezhil meet the producer?

All these questions will be answered in the upcoming episodes. Stay tuned for more details.