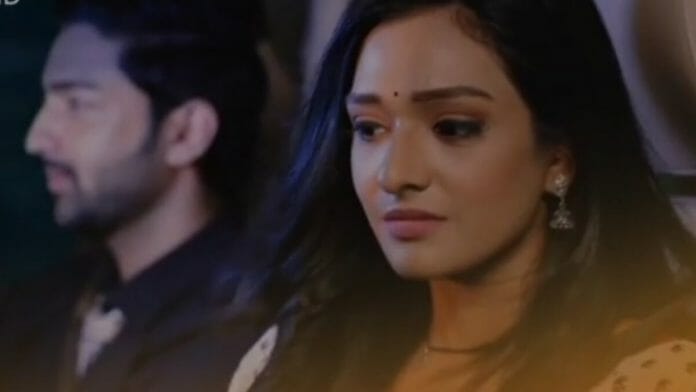 Recap; Neelam learnt about Lakshmi’s grandpa regained his concious. She cancelled Rishi’s board meeting and take Rishi to hospital. Thief demand Lakshmi to give her Nuptial chain but she denied it)

The scene begins with Lakshmi bites the thief hands. He about to slap her but Rishi stops him. He fights with the goons. Thief runs from there. Rishi searched for Lakshmi and finds her in unconscious state. Rishi gets panic seeing her in that state. He tried to wake her up. He noticed her neck bleeding. He takes her to hospital. Neelam noticed them and inquire Rishi what happened there? Rishi narrated the situation to her. The doctor checks Lakshmi and informs them nothing to worry. It’s a small cut on her neck. She fainted due to shock. Neelam caress Lakshmi’s face. She gains her conscious. Rishi asks her what’s the need to risk her life. Doesn’t he asked her to give the jewels to them?

Lakshmi asks him how will she give her Nuptial chain to them? Rishi tells her it’s also a chain right? He will buy another one for her. It’s not a big deal. Neelam scolds him for talking nonsense. She says to him that nothing is equal to her nuptial chain. He doesn’t know the value of nuptial chain. She says to him that every girl wearing nuptial chain for their husband. It’s her feelings he shouldn’t look down on it. Neelam remembers the dealing with Lakshmi and hers. She asked Lakshmi to don’t remove her nuptial chain at any situation. Priest strictly said to her that Lakshmi’s stars only save Rishi from danger.

Lakshmi shouldn’t remove her nuptial chain. Rishi’s life will be in danger if she do it. Neelam thank Lakshmi for her sacrifice. Lakshmi assures her that she won’t remove it at any cost. Neelam hugs her in happiness. Rishi leaves from there. Ayush reaches there and inquire him about Lakshmi. Rishi shared to him that he was fed up with Neelam’s superstitious beliefs. She is playing with Lakshmi’s life. He doesn’t want to hurt her. It’s too much. She is also a human being. Why should she sacrifice this much to save him. Doesn’t mom worry about Lakshmi’s life? What if something happen to her?

Ayush says to him that Lakshmi isn’t expecting anything in return. Why don’t he give the life she deserved? Rishi asks him to stop trying to divert him. He is feeling pity on Lakshmi. Ayush says that he cared for her and started falling for her. That is why his love reflecting as angry on her. Rishi glared at him and leaves from there. Ayush follows him behind. He noticed a girl crossing him. Someone mentioned her as ladoo. Rishi gets nervous inside him. He follows that girl behind. That girl reached to a slum area. He recognized that Lakshmi lived in that area. Later, Rishi asks the neighbor about Ladoo. They praised a lot about her. He confirm with them that ladoo studied in the same University where he studied. He hugs Ayush in happiness. He is on cloud nine after find out his ladoo.