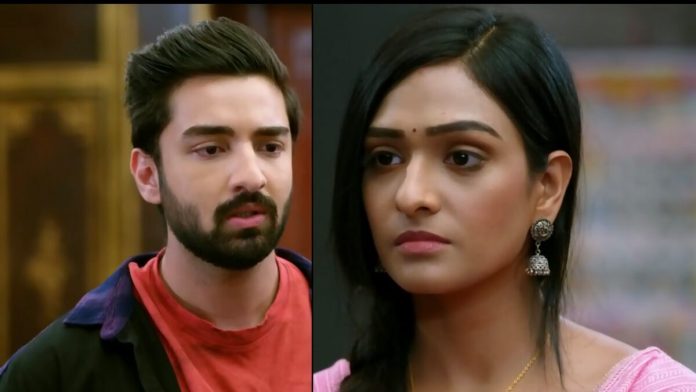 Scene begins in Rishi stops the auto and site beside Lakshmi giving surprise to her. She asks to him what’s he doing? He whisper to her that he don’t think that auto driver is good one so he will accompany her till her home. Lakshmi says that no need of that she can able to manage it. But Rishi is adamant in his decision and tells her he won’t deny his mom’s words. Hearing it Lakshmi calm down! She tells him that auto driver is in her father age so he seems good. He asks her how could she trust someone like this? What if he kidnap her or misbehave with her? Lakshmi says that even Rishi is stranger to her how will she trust him? Rishi didn’t expected this from her. He keeps quite and sits far from her in embarrassment. He really don’t feel to tell her that he is not a type something is disturbing him. Lakshmi apologies to him for hurting him in this way and tells him she know that he is a good one. He cares for her that’s why he was ready to drop her in home. More then that he has a sister and mom like Neelam so she can trust him. Rishi feels good hearing it.

Lakshmi adds that likewise this auto driver is also good Person because he kept his family photo in his auto. She pointed it to him. Two daughters is in it. She tells him that he has two daughters in her age so he won’t do like that. Rishi gets surprise to see her understanding of her. She apologized to him again for hurting him. He tells her that he don’t mind it. She clears to him that she tries to explain this matter that’s why she used such word.

Rishi smiles and give hand to her and says I’m Rishi oberoi. She shakes her hands with him hesitately and mentions her name to him as Lakshmi. He thinks that Laddo should be like her because she is so kind and understanding. He thinks that he is waiting to see one important person in his life, when he meeting her he will definitely share about this girl to Laddo! He mentions Ladoo name little bit louder Lakshmi stares him in weird way! He shows laddo in sweet stall and tells her its his favourite sweets. He craves to eat it! Lakshmi shakes her head. How about eat it? She denies it reasoning its may not hygenic. Lakshmi asks the driver to stop the auto. She shares to Rishi that her place came. He gets down from auto and give space to her. Lakshmi about to pay her Money he stops her. He tells her that he will pay for her but she deny it. Both are arguing over it whom will pay the money. Driver says that he wanna go back to home so please give money asap. Rishi pays before her. Lakshmi sigh and puts her money on his money pot surprising both of them.

Lakshmi tells says to auto driver that this money will help his daughters education. Lakshmi’s attitude impress Rishi there. He too donates for his daughter education. Auto driver gets happy and offers to drop him back in his home. Lakshmi asks Rishi to wait for sometime and goes to her house. She returns in few minutes and gifts him one box. She shares to her that she cooked this laddo so he can take it to his home. Doesn’t he said its his favourite. She don’t know whether it’s up-to his taste, but it’s healthy one. Rishi thank her Lakshmi bids bye to him and leaves.