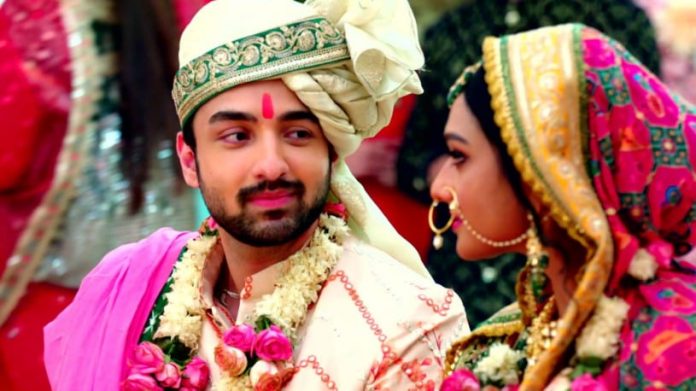 Scene begins in Rishi promises to Neelam that he is ready to marry Lakshmi surprise her. Neelam is on cloud nine and thank him. Rishi pleads her to take tablets and food on time and stop hurting herself for him. Neelam nods to him while caressing his face. Lakshmi listens to this and smiles little. Rishi asks Soniya to take care of mom. Lakshmi about to talk with Neelam he stops her. He says that she needs rest let’s talk with her tomorrow. Rishi takes Lakshmi from there by holding her hand. Dadhi says to Neelam they will lead a happy life together nothing to worry. Rishi rakes Lakshmi to terrace. He is silent there for few seconds. Lakshmi understands that he wanna talk with her something. Lakshmi says that he don’t wanna hesitate but share anything with her. Rishi faces her and says that see Lakshmi, he agreed to marry her for mom’s sake. Lakshmi tries to interrupt him but he stop her.

Rishi adds that lemme finish first. Like she expecting he can’t able to treat her as a good wife of him. Its hard for him to accept her in his life. Because he is loving someone sincerely. Lakshmi is silent after hearing it. Unknown tears forms in her eyes after hearing it. She wipes it off in nick of time. Rishi adds that he can understand marriage is a big thing he wanna fulfill his responsibility. He says that he wanna marry to his love but due to mom’s adamant nature he gonna marry Lakshmi forcefully. He asks her to don’t develop any feelings on him because he is belongs to someone else. He will be a name sake husband to her. It means he will play her husband role till his horoscope problem end after that he will divorce her. Lakshmi gets shock to hear it. Rishi apologize to her for put weird condition to her but he has no option then this in his life. Neither he can’t able to see his mom in that state nor cheat his love. He knows it’s wrong to play in Lakshmi’s life. She don’t need to sacrifice this much for him if she respect his decision she can marry him or else leave. Lakshmi says that she don’t expect anything from him. Because she don’t have any aim in her life. Just following the destiny she says and walks way giving shock to him.

Rishi thinks what’s she meant? Is she agreed to my conditions? Just then Ayush comes there and glares at him. He asks him how could he talk like this to Lakshmi? She is also human beings why did his family playing in her life? It’s not good to snatch her happiness in this way for your selfishness. Rishi says that he is not forcing her to marry him. Ayush says that mom is adamant in this matter just for Rishi’s sake. Rishi asks him to stop taking class to him..