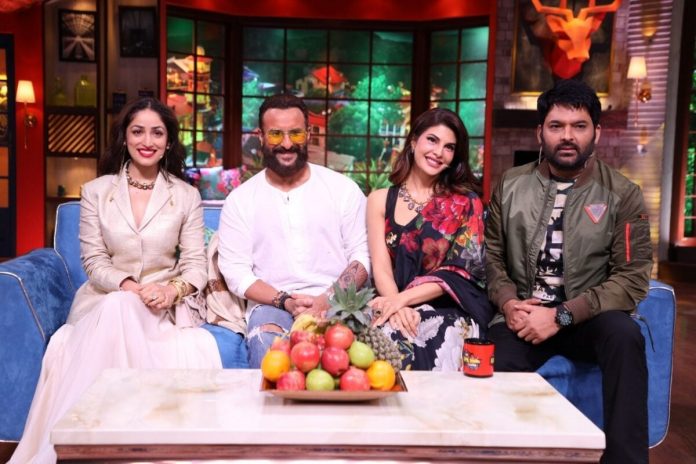 The cast of Bhoot Police – Saif Ali Khan, Yami Gautam and Jacqueline Fernandes will be seen sharing the stage on The Kapil Sharma Show promoting their new film. The trio star along with Arjun Kapoor in the horror comedy which tells the tale of a fictional tea estate and the ghost that haunts it.

Talking about the filming locations, Kapil Sharma asked whether the shoot happened in Dalhousie to which the guests shared their shoot experiences. Saif Ali Khan also mentioned that the tea estate where they filmed ‘Bhoot Police’ is the same place where the song ‘Ek Ladki Ko Dekha Toh Aisa Laga’ from the film ‘1942: A Love Story’ was also shot.

The Nawab of Bollywood revealed that it was his first visit to Dalhousie, “Bohot khoobsurat jagah hai.”

Kapil then called on Yami Gautam about her experience of filming in the hill station to which she retorted, “Main toh hoon hi pahado ki rani…”

Saif Ali Khan and Jacqueline Fernandes quite agreed to Yami Gautam’s self-crowned title saying they felt like they were guests at her home. Saif Ali Khan spoke about how Yami Gautam made them feel welcome, “Woh humko host kar rahi thi waha pe”

The trio reminisced how on Diwali they had a buffet at the estate with Kareena Kapoor Khan also present. Jacqueline Fernandes seemed to have become quite a fan of “pahadi khana”, “it was yum! The best food ever!”

Yami also spoke about how her first cousin was getting married in the same location a mere 5 minutes away, but she couldn’t leave the set and go, “My mom was there, everybody was there but maine kaha nahi this is more important, koi baat nahi.”

Watch the trio from ‘Bhoot Police’ engage in some rib-tickling laughter moments this Saturday!

Tune-in to The Kapil Sharma Show, this weekend at 9:30 pm only on Sony Entertainment Television!