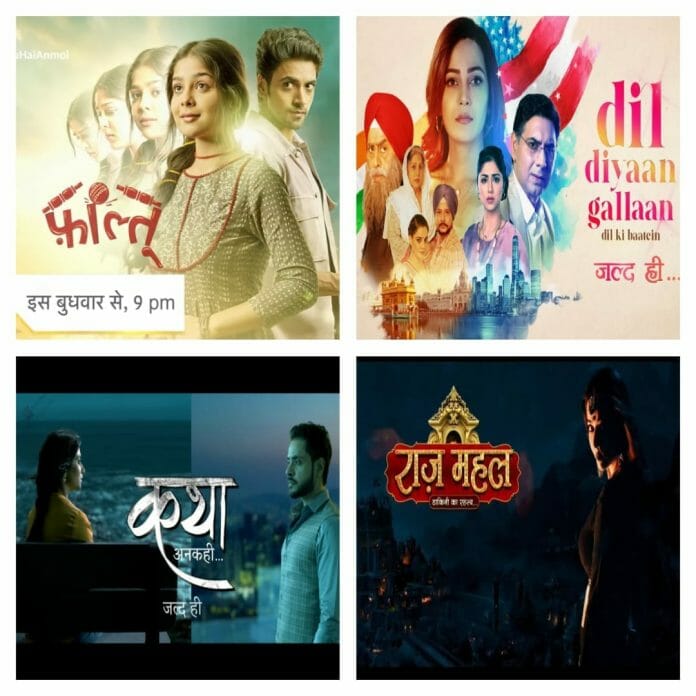 Television is soon going to add four more daily shows to its list across the top GECs and we are looking forward to all of them as each brings something different for the viewers.

Let’s take a look at the four upcoming shows.

Faltu – Star Plus’s most anticipated show and biggest bet for the 9 p.m. prime time slot is Faltu is produced by Boyhood Productions, which boasts some of the longest-running Bengali shows in their kitty. Will they be able to create the same magic on national television? Faltu is set in the backdrop of Rajasthan, where the titular character “Faltu” is an unwanted child who aspires to be a cricketer. Faltu stars Niharika Chouksey, Akash Ahuja, and Drishti Thakur. It will air from tomorrow.

Dil Diya Gallan – Sony Sab is coming up with another show, Dil Diyan Gallan, which stars Kaveri Priyam (last seen in Sony Sab’s Ziddi Dil Mane Na). Dil Diya Gallan will be helmed by one of the most successful producers, Rashmi Sharma, who creates magic with every single project of hers. Dil Diyan Gallan is about an old couple whose son abandoned them and settled in the USA, and Kaveri will be playing their NRI daughter. It will be exciting to see how the story unfolds.

Katha Ankahee  – The most ambitious effort on Sony TV is Katha Ankahee, a remake of the most watched Turkish programme on Kanal D, Binbir Gece, which has been adapted into more than 50 countries. In the Turkish television series, a woman who is seeking to raise money for her child’s medical expenses receives an offer that alters the course of her life. According to the preferences of the Indian audience, the tale and its presentation may be altered in the Hindi version. Aditi Sharma and Adnan Khan are the stars of the Sphere Origins-produced show.

Raazz Mahal – Shemaroo Umang’s upcoming big project is in the horror genre. Aarav Chowdhary and Preeti Puri will be playing the protagonists, whereas Ridhiema Tiwari will play the antagonist.

Which of these are you excited to watch?