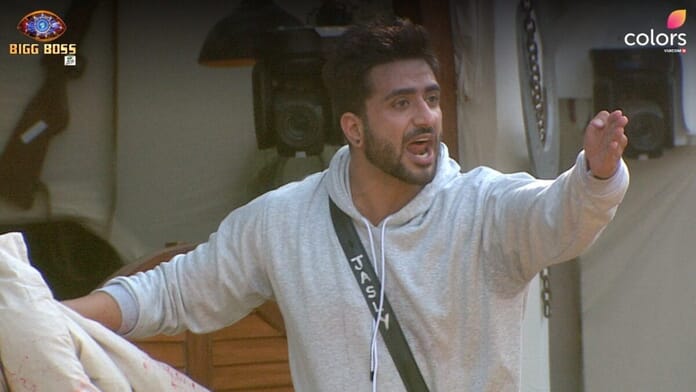 Today’s episode opens with Day 132 at 6 PM; Rakhi saying that Devo last day only predicted that Paras will flip. Paras and Devoleena argues with each other. Rakhi asks to move on. Devoleena accuse inmates for trusting Paras.

6:45 PM; Devoleena says to Rakhi is ever BB will give yet another chance than she should play. Rakhi regret for not performing task and Vindu didn’t supported her. She cries and says she is made to loose.

8:30 PM; Nikki says to Rubina and Jyotika that Jasmin is mean. Rubina says she don’t want to keep any relationship with Jasmin from now. Jyotika tell Rubina when she cried post Jasmin’s eviction, Jasmin gave interview that Rubina was doing drama.

4PM; Bigg Boss give yet another chance to Rakhi, Aly and Rahul to secure their place in top 5. He asks Rubina to read the task details.  As per the task Rakhi, Rahul and Aly can either shred the check writing the amount flashing on the ATM or can deposit the check. If check is shredded than winner will lose that amount from their price money and if Rakhi, Rahul and Aly deposit the check than they will be nominated for whole week. Rakhi, Rahul and Aly can make task strategy along with their connection and others. Aly and Rahul makes a task strategy. They decide they won’t let Rakhi to head forward towards the finale.

4:45 PM; Rakhi decides to go first so that in less budget she will save herself. Rahul and Aly oppose. Rakhi announce and says to BB that she will go first. Aly and Rahul says without mutual understanding she can’t go. Aly says he will go first. Rakhi says they can kill her but she will only go first. Aly, Rahul and Rakhi argues with each other. Rakhi gets adamant to go in finale.

5 PM; Buzzer ring and task starts. Aly and Rahul runs towards the ATM. Rahul, Rakhi and Aly gets shocked seeing 14 Lacs amount. Aly says that he wants to deposit 14Lacs. Rahul asks Aly to let Rakhi go else in upcoming round amount will rise and they won’t be able to shred that. Rakhi argues with Aly for not letting her game. She says she wants to go in the finale. Rahul asks Rakhi if they let her go than she will deposit or shred. Rakhi says she will shred as she wants to go to finale. Aly says winning amount is someone’s share and he can’t let it go simply. Rakhi gets adamant to go first.

5:15 PM; Rahul and Aly asks Rakhi to think calmly over her decision. Aly don’t let Rahul speak and latter gets upset. Aly asks Rahul to come and complete the talk. Rakhi refuses to listen to anyone and says she will shred 14 Lacs. Aly and Rahul decides to cancel the task.

Bigg Boss announce if Rakhi, Rahul and Aly will attempt to cancel the task than winner’s prize money will become zero. Aly asks Rakhi to go. Rakhi destroy 14 Lacs and cries. Inmates goes against Rakhi. Aly and Rahul gets angry on Rakhi. Rakhi says she is happy that she is in finale.

5:30 PM; Rakhi says she thought it will be 3 Lacs but it was 14. Rahul asks Rakhi to stop speaking. Inmates gets upset with Rakhi’s behavior.

Jasmin asks Aly to calm down. Aly asks Jasmin to stop pacifying him. He asks Jasmin that she is not contestant thus she should not interfere as he won’t bear anyone raising question on her. Jasmin decides to stay quiet. Ahead, buzzer ring for 15 LACS. Rahul and Aly goes to the ATM. Aly deposit the money. Inmates clap for Aly.

Later, last buzzer ring; Rahul get a chance to shred 16 LACS but he deposit. Inmates clap for Rahul too. Bigg Boss announce Rakhi is second contestant to go in Finale. He adds finale prize money is 36 LACS.

8:30 PM; Rubina reads Smith and Jones task. Inmates have to cook for their connections. Rakhi, Nikki and Rubina in one team. Rahul, Devo and Aly in one. Both the teams have to catch points from connection to win the task.

8:45 PM; Both the teams cook the food. Team Rahul wins the task.

10 45PM; Rakhi says to Rahul if he will win the game than she will pay him back 14 LACs. Paras, Rakhi, Nikki and Toshi enjoys. (Episode Ends)