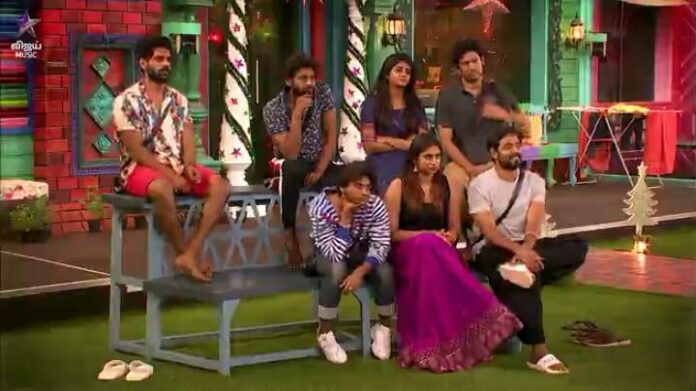 Today episode starts with Day 85 at 8am. Morning wake up song plays at the house. Housemates starts waking up and starts dancing for the song ” Valliye sakkara valliye song” and greeted each other.

At 11.25 All housemates are settled in living area. Bigg Boss announce to nominate two person to evict from this house with a valid reason. They can’t able to nominate captain of the house Aari. Bala saying so he need to think new option. Bigg Boss ask Ramya to nominate those two persons. Bala laughing hearing it. Ramya nominated Aajeedh and Gabby for less competitive in the house. Rio nominated Ramya reasoning she is tough competitor her performance are high here and Shivani because he didn’t see her maximum effort here. Somu nominated Shivani and Aajedh for less competitive. Bala nominated Gabby and Somu reasoning he wanna see more contribution from him. Gabby nominated Shivani and Aajeedh. Shivani nominated Aajedh and Gabrilla. Aajeedh nominated Ramya and Somu. Aari nominated Somu and Shivani.

At 11.40 Bala saying to Aajeedh that he was surprised by Aari nomination. Aajeedh says even he didn’t nominate him. Bala laughs saying that Aari point out the coffee task. Ajeedh says that he don’t like when Gabby compared him as less competitive. Here Aari and Somu are discussing about the coffee task.

At 12 Gabby asking to Somu that how many remembering that chit game. She asked many thing openely but he said that she is playing safe game. Somu replies even he answered to all questions. Gabby says its unfair that he nominated her.

At 12.20 Bala saying to Aajeedh that all are complaining that he was not involved in anything. He has no idea where did he not involved? Kamal sir said he has no opinion that’s true basically he is like this only he never poke his head in all. He is damn sure he will be evicted this week so he wish to do anything before going out. Bala saying to him that she is not doing her work properly and he gives an responsibility to her but she mentioned it as strategy. She is not opening up anywhere but blaming others.
Gabby asking to Somu where did he worked? He didn’t done anything. She is mentioning all field and blamming him as nothing and saying he done volunteer. How could he blame her as not opening then how comes she said it infront of kamal sir its an strategy.

At 1.15 Ramya saying to Shivani that Aajeedh got angry. Shivani saying to her that Somu performing well in the task that flaws are hiding in it. Ramya says that Aari is always saved first she always have that doubt whether

At 2.10 Rio asking to Somu Is saying coffee tasting good was wrong. Gabby and Rio are smiling. Somu saying to him its very silly to nominating him with this reason. He can nominate him straightly that he is scared to see him toughest player instead complaining like this.
At 3.50 Aari is reading new task. Udgayam Paruppu task.
They greeted. Aari is reading the features of Udhayam Paruppu. They wanna cook Dhosai and vadai in treditional way. Whom cooking more vadai and Dhosai in short time will win the task. Two persons wanna cook Dhosai and two wanna grind it.

At 4.10 Buzzer plays. Shivani goes to garden with Dhosai maavu. Rio, Aari and Bala are in cooking team. Ramya and Somu are grinding in garden area and Gabby, Shivani another team. They came with vada maavu. They are cooking together in kitchen. Buzzer plays.

Bigg Boss congratulated Bala, Somu, Ramya and Rio. They takes the gift from the store room. They said slogan about Udhayam paruppu.

At 7.20 Aajeedh asking him to silent. Somu finds out what did he done in the bathroom. He ask them to reveal it. Somu says to him that he came to Bathroom on that time he heard sound three times so he punched on wall in anger that’s why this wound. Rio advising to him that he too done it. Its bad thing so don’t do it.

At 7.40 Rio reading next task. Maathi yosi. We are celebrating many functions in this Bigg Boss house. We are gonna celebrate New year in this house. We crossed 85 days here. Housemates gonna say to their housemates what can they bring it to next year or not from their merits and demerits.

At 7.50 Aajeedh takes one name. He takes Shivani name. He says her positiveness is she is herself always takes it to next year and don’t break down.
Shivani get Somu name. She ask him to bring his loveliness to next years. Don’t bring more favouritisim to next year. He get Rio name. He need his friendship don’t change it. He has many double thoughts its demerits. Rio gets Bala name. He ask him to don’t bring this pre judgement to next year. He needs many times to understand everyone. He compare his life experience as example. He can take his self respect and confidence to next year. Bala gets Ramya name. Bala says Ramya is best contestant in this game. Because she is seeing its as just a game. She is following her words. She is hesitating to open up her thoughts don’t smile a lot because its tough to judge her don’t bring it to next year. Ramya got Gabby name. She can take her strongness. She is mentally strong she never leave her friendship all are luck to have her. She might leave her behaviour of giving up. If she give up her hesitation she will be good. Gabby got Aari. Don’t be temper high in all time. Its not good for all. Don’t blame others always. He might take his advise to all. Aari get Aajeedh name. Don’t give up his fighting spirit. Give up his shyness. Talk straight on their face.

At 8.25 Ramya is teasing Bala. Aari says that he expected his name but missed. Bala says to him that many accounts are balance giving and take. Aari replies he is ready for everything.

At 8.40 Aajeedh clearing with Aari what resolution he said for him in stage. Aari ask him to put more effort in the game. He ask him to fight a lot and talk straight on his face. If he feel his point is correct he might fight for it and get his point. Even he is like him here many used him but he understand it and fights back with them.

10.15 Rio saying to Somu that he don’t understand that he used to say validate his task. He added when he asked about it he used to think what

11.10 Bala asking to Aajeedh to divide his work. Aari saying to him that house is same but workers are less. Aajeedh says that he will do breakfast. Bala will do lunch and Aari at dinner. If we takes three portion then everything is over.

At 11.30 Somu saying to Aari that he understand why did he nominated him. He thought its an silly matter but now he understand the depth of it. Both hugged each other and gives hifi.