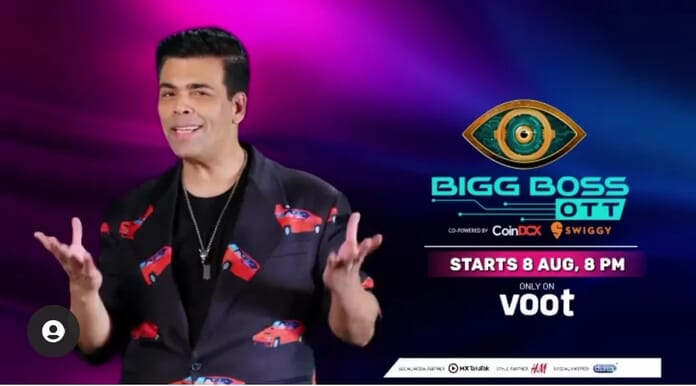 Karan Johar enters the stage sadly as the song Kabhi Khushi Kabhi Ghum plays in the background. He says what will happen to him now. He says he is really going to miss each and every moment. He says he can’t believe that they are finally going to seperate. He says his eyes will rain a lot today. He will remember 24*7. He used to do Sunday Ka Vaar but now what he will do. He asks to go ahead and see what happened yesterday.

The inmates wake up to the song Dabhi dabhi si hasi. Divya and Nishant dance in the garden.

Divya reads the letter from Bigg Boss which says that they should play two skita today. One task is gluten bani sautan and gives a skit to them. Shamitha amd Raqesh are partner’s while Divya is behind Raqesh. Next skit is Nishant will be the broker. Divya and Pratik are the couple are Nishant makes them meet.

The housemates discuss about the skit with each other.

Pratik tells Nishaht that he hopes to see him again. Divya asks him whether she can call him brother. He apologises to her and they both hug each other. Divya tells him that when he didn’t spoke to her it hurted her.

Shamitha tells them that she feels the cameras are off now. Divya and Nishant with Pratjk tease her. Shamitha asks them to stop. Divya tells Raqesh that the cameras are off and asks him to kiss Shamitha. He denies. She calls Shamitha and tells her that he us calling her. Raqesh comes to them. The house mates tease him as well. They pull Raqesh towards her. They force then to kiss. They both hug each other. They cover them and then they shout happily saying they kissed.

Karan tells them now one of them will be out of the race. Because the audience didn’t give rhem those many votes. He asks Nishant to bring something from the house. He asks them to lift the envelope with theie name. It is their fate letter. Someone else will open it. He asks Nishant to lift it. He counts and Nishant opens it. Shamitha is safe. He then aaks Divya to open and Nishant is safe. He then asks Shamitha to open and Raqesh gets evicted. Divya is safe. Karan appreciates him. Raqesh leaves rhe house. Raqesh hugs Shamitha and kisses her on her cheek. He hugs everyone and leaves. Karan Johar welcomes Raqesh on to the stage. Raqesh says his journey was like a good accident for him. Karan and Rithwik come onto the stage. Karan Johar presents Raqesh and Shamitha’s performance. They do a romantic dance. Karan tells them that they have become one big family ajd there must be something in their hearts. He asks them to say what thet have in their hearts. Nishant says that he wahts ro apologise to Shamitha genuinely because he has said many things about her. He says she has always been there. He apologises to her. They both hug each other. He says he wants to apologise to Neha. He says without her the entertainment from his side wouldn’t have been this hit. He apologises to her and thanks her for having humanity in her. He then apologises to Raqesh for not standing with him and for saying mean things to him. Karan asks Shamitha who says she regrets for letting negativity taking over her mind. She misunderstood Divya’s friendship with Raqesh. She reconciles with Shamitha. Karan asks Divya who says she was misunderstood a lot and with whoever she made friendship, it was with her heart. She wanted to enjoy but when she saw fun videos she understood that she hasn’t done good amd hasn’t understood anybody. Divya says whatever she has done or did was to protect herself. She apologises to everyone for hurting them. Karan says now it’s time for one of them to come out of the house. He says one of them will be out of the race. He says who got less votes is Shamitha. He says Shamitha made it ro the top three. He calls her on the stage. She leaves from there after bidding bye to everyone. Shamitha hugs Karan. Karan asks her about her feeling to which she says she didn’t feel that bad because she never expected to come till here. Shamitha says she got used to seeing Raqesh. She will miss that. She says that she learnt that she should trust a little more. Karan wishes her the best. Karan asks to take enjoyment in Divya and Pratik’s performance. Divya performers on the song Nagin. Pratik performs on the song Tashn Mein. They both together dance on the song Jashn E Ishq. Karan says the show is at final stage. Everyone will have a mixed feeling. Bigg Boss tells that Divya and Nishant are the two finalists of the house. He says Divya was alone all the way. While Nishaht had a great connection with Moose. Divya was disliked while Nishaht was liked. They both have equality because their journey was OTT as well. They never got scared from telling their mind. He says one of them will be winner but that doesn’t mean the other is the loser because they have won hearts. He wishes them the best. Bigg Boss asks them to leave holding each other’s hands. They both thank him. They both leave together holding hands after saying Love You and Miss You to Bigg Boss House. Karan calls both Nishaht and Divya onto the stage. They both hug him. He asks them how they are feeling. He says one of them will get the trophy. He says he can feel their tension. He wishes them both Love. Divya says she never thought she will be here. Nishant says he thought Pratik to be here but he has jumped. Divya says she thought Shamitha to be here. He asks Nishant who should win to which he says he should win because he played with heart. He has given hundred and ten percent justice. He asks Divya who says she wants her to win because she has struggled a lot. The journey was very hard for her. He says now it’s time. He looks at their faces. He says now this is the exciting and suspense time. He holds their hands. He raises both their hands making everyone laugh. Karan says this is huge moment for everyone. He says the winner of first ever season of Bigg Boss OTT is none other than and raises the hand of Divya. Divya breaks down into tears and hugs Karan. Divya takes the trophy happily. Karan says Divya has made history by winning Bigg Boss OTT. He promotes Bigg Boss Season Fifteen. Pratik says he is Lion to which Karan says Salman is Tiger. Pratjk says they will get along then to which Karan says he can’t wait for it. He bids Bye to the Audience.