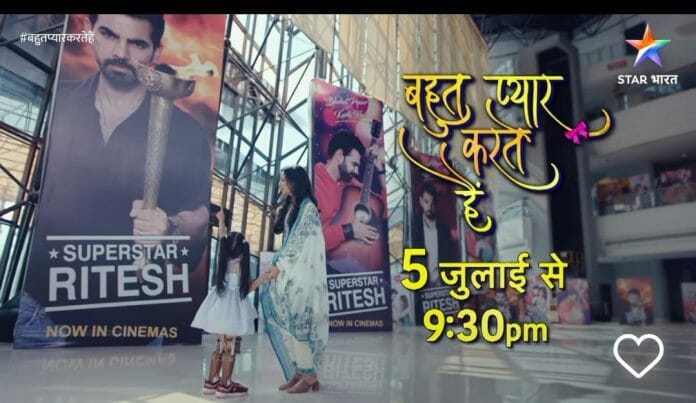 The episode starts with Ritesh takes his new car key. Rahul tells him that the car is in parking lot. Ritesh asks they have followed the instructions of him to modify the car right. His worker says yes. Ritesh gets sad. He then goes to a room but refuses to enter it. He asks Rahul to give the car keys to the person who is inside the room. Rahul refuses saying his every film release he is the one who went to meet her and showed the poster. He also tells that he can’t do this now because it’s his time to go and meet her. Ritesh refuses and tells Rahul he can’t and convinces him to go inside the room.

Rahul opens the door where a paralyzed woman will be seen in a chair surrounded by her caretakers who is feeding her food. Rahul enters the room and goes to the woman. He kneels infront of her and tells her that Ritesh’s new film is going to release today and he bought a new car to gift her. He also tells the car is specially made for her as she loves to go for long drive right. Ritesh gets emotional seeing his mother but stays outside. Rahul takes Ritesh’s mother’s blessing then comes out of the room. He asks Ritesh how long he is going to refuse to meet his mother and when he is planning to meet her.

Ritesh tells that he will never able to see her because he is the reason behind her this state for which he isn’t going to forgive himself ever. He then wears his glasses and tells that now its show time so they have to get going and leaves the place. Rahul tells that everyone calls him a best actor and thinks he have a happy life but no one knows how lonely Ritesh is eventhough there are many people who claims to love him.

Later during dinner Rahul tells Ritesh’s their day plan also tells him after five they can have a party. Ritesh gets happy. Rahul asks him to do his autograph in one of his photo because the RTO officer asked. Ritesh signs it and tells Rahul to made arrangements to talk to the RTO officer for doing his car booking an early registration. Rahul agrees.

Indu in her office busy doing some paper works. She receives a call from Ritesh and the latter introduces him but Indu thinks that it’s a prank call so she tells then she is Deepika Padukone then cuts the call. Ritesh tells Rahul that the RTO officer disconnected the call thinking it’s a prank call. Rahul smiles. Ritesh decides to call her again. Indu takes a file to go somewhere but stops when she hears the phone. She takes the call and Ritesh asks her not to cut the call and tells her that he is indeed Ritesh Malhotra and tells her his car number.

Indu apologises to him but Ritesh Ritesh asks her not to. He then thanks her to help him get an early registration of his new car. Indu tells it’s her who has to thank him actually for helping her taken an important decision in her life because of which her life is beautiful now. Ritesh gets happy hearing it. Indu wishes him all the happiness and Ritesh tells the new car which registration she has done earlier is the one who going to make his favorite person happy and he don’t want nothing more than that. They both wishes each other best of luck.

Rahul tells Ritesh in the multiplex theater they will meet one of the minister first. Ritesh asks his jacket and Rahul asks him not to worry because it’s in the car only. Rahul also receives a call from the theatre saying all the works are done and the minister is also on his way. Ritesh gets excited.

Indu comes out of her office and meet a guy who comes to give a driving test. She puts the bluetooth speaker in her ear and calls her sister asks her to pick up Zoon from school. Anjali tells she is on her way. She then gets into an argument when a guy hit her bike. Indu gives instructions to the guy who came here to give driving test. Indu receives a call from Anjali who tells her there is no kid in the school. Indu instructs her to go and check with the security. Anjali enters and the security asks her to check in the waiting room. Indu instructs her to reach the waiting area but the person who comes to give driving test also follows her instructions thinking it’s for him. He complains how she is making him do the rounds which is not at all necessary.

Anjali informs Indu that Zoon is not here too. Indu gets worried also realises that because of her the person behind her followed wrong instructions so she apologises to him then asks him to come in the evening but the guy refuses saying he has to go and watch Ritesh’s new film. Indu recalls Zoon’s wish to go for Ritesh’s movie so she asks Anjali to go to the nearby theatre.

Anjali agrees. Zoon gets caught by one of her neighbor who is working in the theatre. He takes her inside w waiting room and asks her why she came here alone. Zoon tells that she is upset but after she watch Ritesh’s movie she will be alright. Her neighbor scolds her for not informing her mother but promises her to make her meet Ritesh. He then asks her to wait and asks his co worker to take care of Zoon then leaves the place.

Raghav takes good care of Zoon also tells that Ritesh feels good luck when the tikka is put on his cutouts before his movie gets released when Zoon questions him the reason behind the vermilion that’s in a plate infront of her. Indu reaches the theatre and searches for Zoon. Ritesh reaches the theatre and throws his bracelet to towards the crowd and waves at them. His fans goes crazy that makes him smile. Indu and Anjali together decides to find Zoon at any cost. Vivek enters Indu’s house but Zoon’s photo frame falls to the ground and breaks. He looks at the broken photo frame worriedly. Indu feels restless and thinks she have a feeling something wrong is going to happen with Zoon.