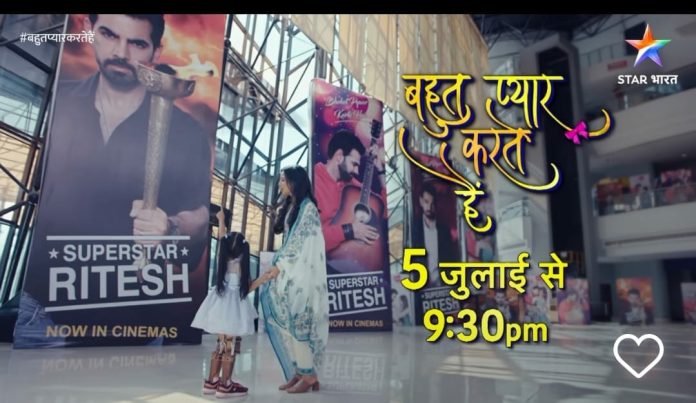 The episode starts with Kadambari telling her worker in order to become famous and rich they have to become selfish. If she remains act like a puppet then she will never become the one she wanted to be in her life. She then tells her that she is grounded for next two weeks to cover filed news covering. The reporter pleads her but Kadambari sends her out. She then receives a call from Sameer. She calls him a flop actor but Sameer tells him that he is going to do an advertisement which will give him more popularity so asks her to take his interview. Kadambari insults him and tells him that she isn’t interested in his offer then cuts the call. Sameer gets angry and tells Vivaan about Kadambari’s hatred for men and he tells in order to become famous he needs her.

Other side Zoon arranges her things in her room. Indu comes there with a chocolate milk shake. She asks her is she need any help but the latter refuses. Indu notices that Zoon is still upset so tries to change her mind by telling her that they can play indoor games. Zoon asks her why everyone have father but not her. Indu tells her may be that’s what God want for her and tells her that she loves her the most and hugs her. Zoon tells Indu to talk to Ritesh who promised her to find her her father.

Indu gets angry and upset and tells her that she already warned her not to take Ritesh’s name neither this father’s topic yet she is bringing it up which isn’t right. She also adds that she is doing everything in her power to fulfill her every wish and dreams so asks her to stop acting stubborn. She then asks her to have her chocolate milk shake but Zoon refuses. Indu tells her not to come to her when she feels hungry at late night then leaves the place.

Ritesh reads his film script in his car. Rahul asks him whether he liked the concept or not because it’s a good story line. Ritesh tells the story is revolve around middle class. Rahul tells what is wrong though. Ritesh tells him that he is tired of hearing the middle class related things since the morning. Then the car gets stopped suddenly and Ritesh lools outside and sees the name board of a hotel has Middle class in it so he groans and says he have had enough about this middle class topic.

Zoon on the other side packs her things. She puts it in the table but Indu’s bag drops to the floor. She sees Ritesh’s photo and says Indu told her not to talk about Ritesh yet she is having Ritesh’s photo in her bag which isn’t fair. Rajender comes to the room. Zoon hides the photo. Rajender asks her to have milk shake then she will tell her about her super dad. Zoon gets happy and have the milk shake. Rajender tells her that he is her super dad and he will participate in volleyball match for her. Zoon tells him that he is old. Rajender tells her that he will win because he was once pro at volleyball.

Zoon asks him not to lie and asks why all the elders are lying. Rajender asks her who lied to her. Zoon shows Ritesh’s photo and tells him that Indu reprimanded her from talking about Ritesh but she is carrying his photo in her bag. Indu enters the room and gets surprised seeing Zoon had her milkshake. She then notices both Rajender and Zoon is staring at her so asks what happened. Rajender signs at Indu and acts infront of soon like scolding Indu for carrying Ritesh’s photo in her bag also the reason behind it. Zoon asks Rajender to not to scold Indu because father’s loves their daughter and that’s the reason she wants father. Indu gets upset.

In Malhotra’s house the worker’s talks about Kaamna. One of the worker warns the other one to be careful with his words or else she wont spare him. But the other worker tells her if his financial state is good then he would never work here and decides to have biscuit dipping it in water. Ritesh enters the house and gets annoyed seeing the worker having biscuit using the water. He stops him and tells him that he is increasing his salary and his Diwali bonus shocking the workers also Rahul. Ritesh tells he dont want anyone to be a middle class person around him. The lady worker questions Ritesh why he is being so generous towards over her colleague. Ritesh tells because he is middle class then leaves the place.

Later Rahul advises Ritesh to have proper sleep because the next day shoot is intense scene. Ritesh asks what middle class people gift to one another. Rahul scolds him and asks him to have a good sleep then leaves the room. Ritesh receives a call from Amit and gets shocked hearing something. He calls out Sameer and finds the latter in his room partying with his friends. He drags him out and asks his friends to get out. He then asks him how dare he can accept an advertisement offer which promotes Gutka. Sameer tells him that he will do that ad but Ritesh asks him not to do it. Sameer asks Ritesh to withdraw his new film offer. Ritesh gets angry and tells him he have no rights to ask him to do this. Sameer tells then he have also no say in what he can and can’t do. They both gets into an argument which leads to a physical fight.

Ritesh asks him to leave the house if he is going to do that ad. Pankaj and Kaamna seperates both of them. Pankaj promises Ritesh that Sameer wont do that ad. Ritesh goes to his room. Pankaj scolds and insults Kaamna for Sameer’s behavior. The latter get hurt. Other side Indu gets upset with Ritesh for the promise he made to Zoon. Vivek suggests her an idea. Indu gets happy and tells Zoon Zoon tomorrow her dad will participate in the volleyball match. Zoon gets happy. Indu hopes Vivek’s plan work out on her favor.

Precap: The teacher announces the special guest of their school today is an actor Ritesh Malhotra. Zoon gets happy. She then wonders why her father isn’t here her. The teacher calls Zoon’s father to come over. Ritesh thinks the kid told him the other day she dont have a father then how come he can make an entry. Vivek asks to come out Zoon’s father. He then looks at the person and says their perfect plan will work on their favor and smiles.