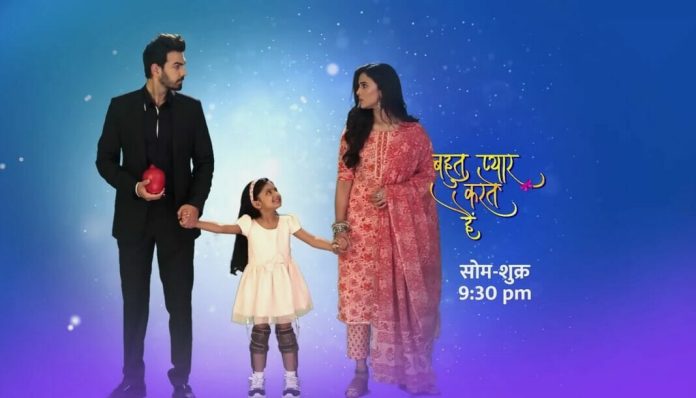 The episode starts with Vivek tells Indu having noodles in the middle of night is something else. He then asks her the reason behind being upset. Indu asks him to shut up and tells that she made a promise to Zoon that her father will attend the volleyball game but she worries telling all this and making a promise to Zoon may land her in trouble. Vivek tells her that he is an event manager so he knows what is he doing so asks her to have faith in her because their plan will work on their favor.

The other side Ritesh recalls his fight with Sameer and the words Sameer used against him. He then calls Rahul and asks him to tell the advertisement company to give his offer to Sameer and in return he is ready to do their next three four advertisement and they can get discount upto thrity to fourty percentage from his actual payment. Rahul gets shocked and scolds Ritesh and asks him what happened. Ritesh asks him to do what he told him now. Rahul wonders what is wrong with Ritesh though. The next day Indu gets ready early.

Sunita questions her and the latter tells that she is going to Zoon’s school annual sports day celebration. She also asks Sunita to help Zoon get ready and says she made a promise to Zoon her father will attend the sports day celebration. Sunita gets shocked and surprised and asks Indu is she seeing someone. Indu tells her no. Sunita gets confused so she warns her not to do something that will land her in more trouble also the family members. Indu assures her nothing such will happen and leaves the house.

Rahul informs Ritesh the company agreed to give the advertisement opportunity to Sameer. He then asks him what happened why he is doing all this. Ritesh tells him after his fight with Sameer he realised Sameer is not wrong because both his films are flop so he dont get opportunity to show his talent to everyone. He further tells that he can’t repeat mistakes like gifting a car to Indu who is from middle class family. He also adds that he is going to rectify that mistake too which confuses Rahul. Rahul asks him what he planned to do. The worker comes a puts the grocery items in Ritesh’s room. Ritesh tells Rahul he is going to gift this to Indu. Rahul gets shocked and asks him is he lost his mind and tells him that Indu won’t spare him.

Ritesh defends himself saying he is the one who told him that middle class family will run out of ration during month ends so he is doing what’s right. He then asks the worker to gift wrap it and send up Indu then leaves the room. Rahul scolds the worker then leaves the place. Indu goes to meet Zoon’s school principal. She apologises to her for meeting her without getting her appointment. The principal tells her that she understands it must be hard for Zoon to not able to see her father to participate like other kids father. Indu tells she came here to talk to her about this only and shares her plan with the principal. The principal asks her dont she thinks that she is giving false hope to Zoon.

Peon comes to the principal and tells her the teacher whose responsibility to take care of the special guest of today’s event requested her to talk to their chief guest. Principal wonders what happened but calls Kadambari who is going to be a chief guest. Kadambari tells Nidhi about her demands also tells her that she wants her to welcome her personally. Nidhi agrees and cuts the call. She says to herself the actor’s are far better than Kadambari. Other side Rajender and Asha takes a note what all are the grocery items ran out and they have to buy. They hears the door bell.

Asha opens it and gets shocked seeing few men carrying gift boxes in their hand and tells her Ritesh Malhotra sends it. Rajender and Asha gets shocked and surprised. They both discusess that there must be something going on between Ritesh and Indu. Asha exclaims that means Ritesh is going to be this house son in law? Sunita comes there and asks her who is going to be a son in law of this house. Asha tells Ritesh Malhotra.

Sunita also thinks that Indu talked about letting Zoon’s father attend the sports day celebration today in Zoon’s school and Zoon telling her genie Ritesh will help her find her father. She connects both and misunderstands both Indu and Ritesh is in relationship. Raina’s then opens the gift box and finds the groceries inside which confuses them but Sunita tells its such a sweet gesture by Ritesh and she knows he will take care of Indu well after marriage. Rajender also tells it’s a thoughtful gift.

Ritesh gets happy when Rahul tells him his gift reached the Raina’s on his way to shoot. His car get stuck in nearby Zoon’s school and their driver says they need mechanic. Rahul decides to book a cab for Ritesh to reach the shooting spot on time. Ritesh sees Nidhi and the other teachers outside. He goes to Nidhi and praises her for the lessons she taught him. She invites him to the sports day celebration. Ritesh agrees and asks Rahul to give excuses to the producer. He then enters the auditorium. The kids gets happy seeing him. Zoon gets excited.

Other side Vivek calls out Zoon’s father and tells this plan will work on their favor for sure. The teacher asks the kids to come forward whose fathers are going to participate in the volleyball game. Zoon also comes forward. The teacher calls one by one names of the kids father. Ritesh notices Zoon and recalls her request the other day and wonders what’s happening here how come Zoon’s father can participate though. Meawhile Nidhi goes to welcome Kadambari. Zoon looks on sadly when the teacher repeatedly asks Zoon’s father to come forward.

Precap: Zoon and Kadambari collides with each other. Kadambari scolds Zoon for her mobile is dropped to the floor. Zoon asks her to keep her important things safe if she truly things something important which shocks Kadambari. Everyone cheers for Zoon’s father and Ritesh looks on.