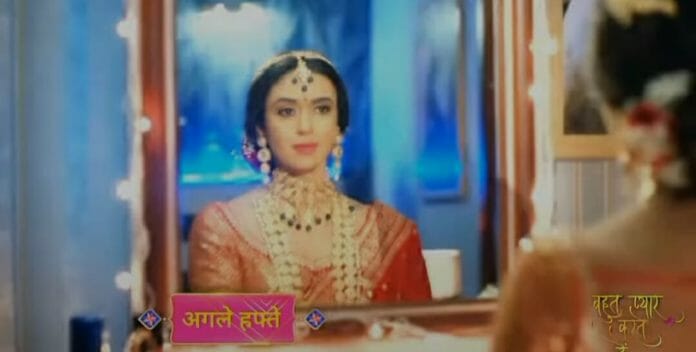 Star Bharat’s show Bohot Pyaar Karte Hai is gearing up with an interesting drama with Kadambari entering the Raina’s house and create a drama infront of the guests to gain public support and it works on her favor which worries Indu and Ritesh.

In the previous episode we had seen that Indu saw Ritesh was opposite to her when she opened her mouth to talk to him the latter praised himself also mocked at Indu and told her now her dressing sense was improved which annoyed Indu so she once again tried to scold him but Zoon interrupted them.

She complimented Ritesh. Indu noticed due to injury he couldn’t able to life Zoon so she took Zoon in her arms and Zoon kissed both Ritesh and Indu. They both smiled at her. Rahul got hurt when he saw Anjali and Vivaan’s closeness. Later while Indu’s hands were filled by mehendi both Malhotra’s and Raina’s danced happily.

Zoon shared Indu her wish to apply mehendi on her hand too but Indu refused saying it was against the school rules so she went to Ritesh and the latter told her she can apply mehendi and took her to the designer which made Zoon happy.

Indu stopped the mehendi designer from applying mehendi on Zoon’s hand and refused to gave permission to Zoon. Ritesh tried to persuade Indu but the latter remained stubborn so he decided to find some other way to fulfill Zoon’s wish. Other side Magesh lashed out at Sameer and tore the ticket to Bhopal into pieces then left the place which made Sameer furious.