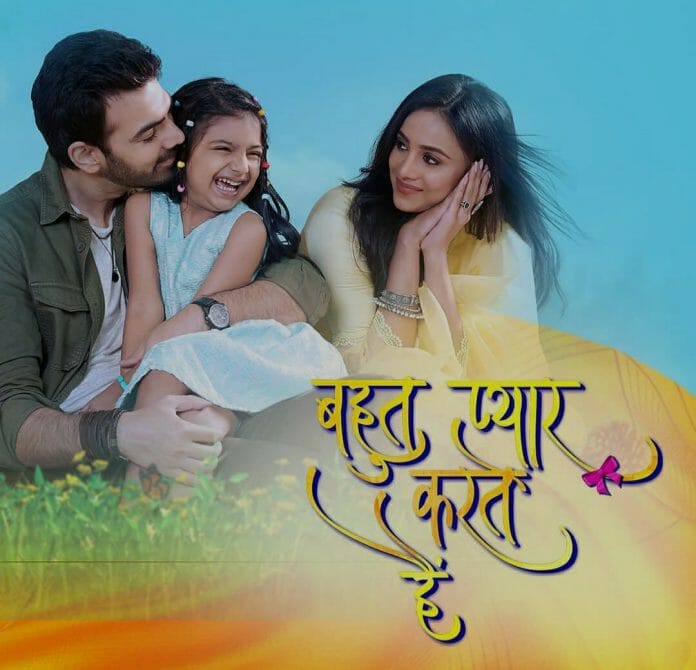 This week Bohot Pyaar Karte Hai started with Sunita questioned Indu about her decision to not to took the jewellery with them. Indu got furious and reminded her mother at the insults Ritesh thrown at them also his threat to snatch Zoon from her. Sunita shouted let Ritesh do what he wanted to do with Zoon so that they can get rid off Zoon.

Indu broke down and shouted at Sunita that she don’t want to marry anyone. In Malhotra’s mansion Sameer and Vivaan praises Kaamna for her act also her plan got succeed. Kaamna informed them her game was not over yet.

Indu shouted at Zoon when the latter persuaded her to witness the new step she learned. Asha took Zoon inside. Kaamna’s men recorded this video and send it to her. Ritesh who was furious at Indu got determined to gave Zoon the life she deserved.

Rahul tried to calm down Ritesh. Kaamna showed the video clip of Indu’s angry behavior towards Zoon which made Ritesh furious.

Kaamna instigates Ritesh against Indu and manipulated him to took help from Child Adoption Authorities. Ritesh agreed to do what Kaamna suggested him. Rahul tried to make Ritesh understand what he was doing right now isn’t right but Ritesh refused to listen to him.

Kaamna called the adoption care centre and filed a case against Indu on behalf of Ritesh. Indu became worried and anxious when her she had a nightmare that Ritesh snatched Zoon from her by coming to her house with officials. Asha and Anjali calmed down a worried Indu.

Indu got relieved seeing Zoon was sleeping in their house only. She took her in her arms and cried hard. The next day Ritesh done aarti. He recalled his moments with Indu and Zoon. He then prayed God to guide him a right path to take a right decision.

Ritesh asked his legal adviser’s opinion to adopt Zoon. His lawyer informed him they should separate Zoon from Indu first then only he could able to do something to help him adopt her. Rahul questioned the lawyer by pointing out Ritesh was an unmarried man then how it’s possible for Ritesh to adopt Zoon but the lawyer asked him to leave that matter to him.

The lawyer then informed Kaamna as per her instructions he lied to Ritesh about Zoon’s adoption. Kaamna ordered him to keep giving false hope to Ritesh until she asked him not to then send him out. She then shared her plan with Sameer that she wanted to snatch Zoon from Indu also make sure Zoon became homeless.

Indu worried recalling about Ritesh’s vow so she refused to took part in Visarjan neither allowed Zoon to go and take part in it. Anjali and Asha worried but Vivek and Zoon convinced Indu which lead Indu to allow Zoon to be part of the Visarjan.

CAA officials arrived at Indu’s society. They questioned Indu and Zoon’s whereabouts. Indu pretended that she was someone else and took them inside and locked them in a room and went to search for Zoon. The officer’s realised the lady who they were talking with was Indu.

The senior officer alerted the cops. Indu found Zoon and took her with her saying she was taking her to Lonavala which confused Zoon so she questioned Indu. Indu assured her she would tell her everything after they reached Lonavala. She then worried when she saw both cops and the CAA officer’s are approaching her.

She prayed God to help her. She then throw the vermilion at the cops and CAA officer then board on an auto asking the driver to take her to bus station. The officer altered the Mumbai police also informed Kaama that Indu ran away with Zoon. Kaamna got shocked.

Indu realised she neither had her phone with her nor purse when the auto driver asked her to pay after they got stuck in traffic which made Indu worried. Indu’s revelation about not having money made the auto driver angry so he started insulting Indu but Zoon pleaded with the driver to not to scold her mother because she was a good woman.

The driver let them go without taking his fare from them. Zoon saw Ritesh and called out him but Indu hide herself and Zoon from him. Ritesh sensed Zoon’s presence but then prayed to God for her safety when he failed to notice her. Indu board on the truck without the knowledge of the driver when she learned the truck was going to Lonavala.

Ritesh got shocked when Kaamna informed him Indu ran away with Zoon. Ritesh suspected Indu might have took Zoon with her to Lonavala because it was her favorite place.

He decided to took help from the commissioner to learn about Indu and Zoon’s whereabouts. Raina’s gets worried when they realised Indu was nowhere to be found.

Indu gave Zoon a carrot when the latter told her she was hungry also told her a story of Rabbit and Turtle’s race. Anjali learned through Vivaan about what happened to Indu. She got shocked and went to her house and informed her family members about everything.

Raina’s worried. Indu and Zoon get caught by the truck driver. The driver threatened to call the police when he saw Indu and Zoon in the truck. Indu pleaded with the driver and gave her earring as her payment. She then took Zoon with her.

Zoon questioned Indu the reason behind them coming to Lonavala. Indu informed her bad people’s wanted snatch her from her so they had to extend their stay in Lonavala. Zoon agreed . Ritesh and the police officer’s are reached Lonavala in the meantime and the officer assured Ritesh to find Zoon then he will arrest Indu. Indu thought to herself to rectify her mistakes and do what’s right to keep Zoon with her.

Indu asked Zoon to not to believe anyone who might tell her they aren’t mother and daughter. She then went to buy sandwich for Zoon who was hungry. She gave her jewellery to buy sandwich and bottle of water from the shopkeeper and when she returned she got shocked seeing Zoon was nowhere to be found.

Indu saw the vehicles of CAA and the cops. She ran behind it and got shocked finding Ritesh was with Zoon. Ritesh warned Indu to not to create a scene infront of Zoon when the latter tried to take Zoon with her and left with Zoon in the car.

The cops arrested Indu under the charges of kidnapping Zoon also kept her for years illegally. In Raina’s house Sunita’s words against Zoon made everyone upset. She held Zoon responsible for their current state.

Anjali learned through Vivaan about Indu’s arrest which she informed to her family. Rajender’s health got detoriate which made the family members worried.

In the station the officer insulted Indu also warned her to not raise her voice against him. Indu was locked behind the bar’s. Ritesh took Zoon to CAA. Zoon demanded Ritesh to call Indu saying she wanted to see her also she can’t able to stay without Indu which made Ritesh upset.

The CAA officer assured Ritesh to take proper care of Zoon. Ritesh got upset when he heard Zoon’s plea from outside to not to leave her alone here. He urged his lawyer to do something so that he can adopt Zoon. His lawyer got worried but gave false hope to him.

Ritesh expressed to Rahul about feeling guilty for what he done with Zoon eventhough he was doing the right things. Indu cried thinking about Zoon’s whereabouts. She recalled the moments they both shared together. She prayed God to protect her daughter.

Ritesh was on his way to his home. He decided to go back to CAA once he freshen up also decided to cancel his plans for the next day including his shooting schedule despite Rahul’s plea. Ritesh then enquired Jatin about the adoption process of Zoon.

Jatin called Kaamna and informed her about Ritesh’s constant questions about adoption. Kaamna agreed to gave Jatin some money to so that he can leave the city for few days. Vivek arrived at Malhotra’s mansion and Kaamna got shocked when Vivek told her through Vivaan only they learned Indu and Zoon’s current status.

One of the cop gave in and urged Indu to make a call before the senior officer comes back. Indu tried to contact Ritesh but the latter decided not to answer an unknown number. In CAA the caretaker Geeta informed the senior officer Zoon was refusing to have dinner and suggested they should do something special for her.

The senior officer refused it which lead Geeta to scare Zoon and the latter agreed to have food which she was allergic to. Sunita informed Kaamna to not to contact her regarding Zoon.

Sunita’s hatred for Zoon shocked Ritesh. Later in car Rahul advised Ritesh to answer the call from that unknown number which he agreed. Indu alerted him about Zoon’s allergic food. Further she could say something the lady officer disconnect the line and lock her up behind the bars.

Ritesh and Rahul decided to check up on Zoon. The lady officer informed Indu definitely Ritesh was the one who going to defeat her legally using his influence and money. Indu cried hard hearing it. Ritesh and Rahul get shocked when Geeta informed them she fed Zoon the food which she was allergic to which lead Ritesh to break one of the rules of CAA to not to go inside where the kids were staying by entering that place.

Ritesh heard Zoon’s cry so he made Geeta to switch on the light. He found Zoon was affected by the rashes. The senior officer Gayatri called the doctor to treat Zoon. The doctor told Ritesh they had to learn about Zoon’s medical history so that it will help them to provide her proper treatment.

Ritesh went to meet Indu in the prison. Indu enquired him about Zoon’s well being. She then blamed herself for allowing him to get closer to Ritesh unaware about his true nature and ended up in this situation. She further told him Zoon helped him to reconcile his relationship with his mother but he ended up snatching the mother love from Zoon.

Ritesh asked her about Zoon’s medical history and made her talk to the doctor. Indu then used an opportunity to talk to Zoon when Ritesh went to talk to one of the cops child over the video call. Rahul helped Indu to talk to Zoon.

Zoon questioned Indu is she made any mistake is that why they both were in different places and requested her to take her home also suggested to take Ritesh’s help. Indu made a promise to meet her soon. Ritesh arrived there and got upset.

He went to CAA centre where he made Zoon lay on his lap to let her sleep. Indu sang lullaby for Zoon in the prison. After Zoon feel asleep Ritesh stayed in his car.

In the next week viewers will get to see that the advocate will say to the Raina’s inorder to get bail for Indu the latter has to lie. Raina’s will get shocked. Vivek will go to meet Indu. Indu will refuse to follow the lawyer’s advice.

Rajender and Kadambari will see one another and gets shocked. Rajender will thinks Kadambari is Zoon’s mother. Zoon will question Ritesh why he didn’t fulfill the promise he made to her to bring Indu. Ritesh will make a pinky promise to fulfill Zoon’s wishes. Zoon will get happy.