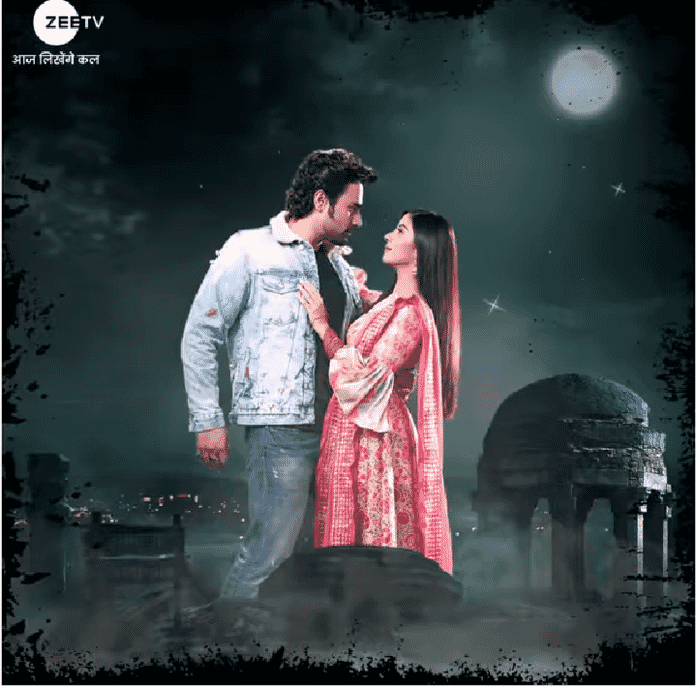 Shalini, Prithvi see Vikram’s wife dead body in suitcase. Prithvi saw Kalindi hiding in his room and realized she saw Raghav file, so they kidnapped Madan and trapped Kalindi, Shalini arranged red kumkum to fall on Kalindi so that brahmarakshas will kill her. Shalini says people know Kalindi is mature, so after seeing dead body, they will doubt why she went to jungle and plan to make excuses.

Sid and Paridhi romance, her bangles break and she says its bad omen.

Kalindi calls for Madan, he motivates her to get up, she is strong.

Angad is ready for marriage, he promises to his father that he will marry the girl his father gave word for. Shakti says this family tolerated a lot, let this marriage be peaceful. Angad asks Minty where is her sister. Minty says she went to drink orange juice, Angad says Kalindi doesn’t eat orange, she lied. Minty realizes and says di will get acidity on drinking orange juice, it means she went somewhere else.

Angad, Paridhi sit on mandap, Damini comes and stops rituals, she says this marriage can’t happen. She says sorry to Prithvi, Shalini because she is about to show a video which will make them feel shame, which no parents would want to see. She shows video of Sid, Paridhi romancing. She says Paridhi is having affair, she can never become her bahu. Angad hugs his mother and calls her mother India. He removes the bridal attire as he wore track suit inside. He says he wouldn’t have married Paridhi even if his mother didn’t show this. He was ready to run away from wedding. He goes out. Shalini slaps Paridhi and says she ruined their reputation. Outside Angad says Kalindi life is in danger, he has to go. Robin says her location is showing jungle.

Brahmarakshas appears before Kalindi, Angad comes as savior and gives her kanjar and tells her to kill rakshas. But rakshas disappears and Madan comes walking there in weak state. Angad stops Kalindi from going near Madan as he doubts Madan as brahmarakshas. Kalindi asks Madan how is he able to walk, few minutes ago he was in so bad condition unable to walk. Madan says he heard brahmarakshas roar, he felt Kalindi is in danger and its kali maa miracle that he got up and went to temple to ring ghanta to save Kalindi. Angad tells Kalindi that Madan made her come to jungle.

Madan says Prithvi made Kalindi to come to jungle, he was thirsty and struggling to drink water, Prithvi came to his room and put chloroform to his nose, he became unconscious and woke up in jungle. Kalindi asks Angad what is he doing here as its the day of his marriage. Angad says long story short, his mother showed the proof of Sid, Paridhi having affair, so the marriage got canceled. Kalindi says she is feeling bad, Angad says he is feeling very good. He will tell his father that he will marry his friend’s daughter Kalindi, his promise will also come true. Kalindi says this is not right time, first she has to find why Prithvi committed all mistakes.

Angad, Kalindi come home and see Prithvi being taken to hospital, Shalini says he realized his sins and got heart attack. Prithvi says he lied to all of them, Uma is Kalindi, Raghav’s daughter. He joins hands of Angad, Kalindi and says he promised Raghav. Kalindi thinks she thought to confront chachu but this happened now. At hospital, doctor asks Shalini how this happened, Prithvi is a healthy man, how he got heart attack suddenly. Shalini says she doesn’t know and goes inside to see Prithvi. She remembers how Prithvi injected himself to get heart attack so that Kalindi will feel pity, he took right amount of dosage just to fall sick and not die.

Brahmarakshas comes to hospital, doctor goes to mortuary and gets shocked to see heart missing from all dead bodies.

Prithvi opens eyes and but talks weirdly. Kalindi comes to see him, he says he will get fine only after she marries Angad.

Damini shows Shakti the necklace she bought for her soon to be bahu Kalindi, she knows her son loves Kalindi. Minty comes and talks to them, Damini asks will she be their choti bahu, will she marry Robin. Minty blushes, Shakti says he has no objection. Robin also agrees with his mother’s decision. Damini gives necklace to Minty. Sakshi collides with Minty and both argue about Robin.

Madan tells Kalindi not to marry Angad, he is her wellwisher, he tells her to think what a man like Prithvi will benefit from her marriage with Angad. May be brahmarakshas will take Angad body and marry her at the time of Mahurat.

Kalindi tells Angad this is not right time to marry, they have to end brahmarakshas chapter first. He asks if she will trust Madan or Prithvi.