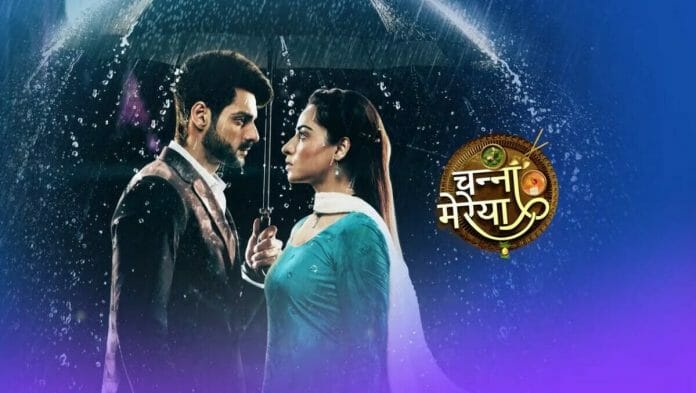 The episode starts with Supreet asking Ginni where is Prasad. Ginni tells that Aditya went to serve everyone the prasad and she told him they have to serve it to Rajvant first because he is an elder of this house. She then tells now she will go and get prasad for everyone in the kitchen.

Aditya gives the prasad to Rajvant. Rajvant praises it and says the one who made the prasad has God’s blessing with that person. Aditya says to Rajvant that he wants to tells him something and asks even after they all know this marriage happened without his knowledge so why did Supreet asking Ginni to make the prasad for everyone. Rajvant laughs and tells now he understands why this prasad is tasty. Ginni comes there and tries to get his attention. In Simran’s room Simran tells Shailaja that she is feeling weak. Shailaja worries and help her get water. She then asks what else she wants.

She also tells that she is happy now she is awake so she and Aditya both can throw Ginni out of the house. Simran thinks to herself that she can take care of what she has to do with Ginni but for now she wants Shailaja to see her pregnancy report so that she can trap everyone in her plans. She acts and asks Shailaja to bring her her tablets which she kept in near by the reports which Shailaja fails to notice and give the tablets. Shailaja decides to leave. Sam gets upset. She then asks Shailaja to bring her hair clip which she kept it above the report. Shailaja goes to take and sees the report. She gets shocked and Simran smirks happily.

Aditya tells Rajvant that he wants to tell him something really important matter. Rajvant gets distracted by a phone call so he tells Aditya he will talk to him later then decides to leave. Ginni comes inside the room and takes his blessings. She then goes to Aditya and pleads him to listen to the truth she wants to tell him. Aditya gets annoyed but asks her to tell it. But Shailaja calls out Aditya so both Aditya and Ginni comes out of the room.

Aditya asks Shailaja what happened. He then sees Simran is sitting in the couch so he rushes to her and asks her is she fine. Amber looks at the pregnancy report which is in his hand. Simran acts and says that before she wake up Shailaja noticed the report and called out you and the family members and she is really sorry for that.

She then acts feeling nauseous so she rushes to the bathroom. Shailaja asks Aditya to not to worry it’s normal when a woman is in this phase. Aditya warns Shailaja to stay away from his personal matter and snatches the report from Supreet’s hand. Amber gets furious and raises his hand at Aditya but Supreet stops him and asks him to calm down saying Aditya isn’t s kid anymore as he is a married man so he has to choose some other way to scold him.

Amber reminds Aditya untill his name is tied with this family he has to behave properly. His one mistake can ruin the reputation of the family though. He also asks him why he is getting to know about truth in his life in installments why can’t he tell everything to them. Simran comes there and acts infront of them that they both planned to tell this to everyone after their marriage. She also tells the reason she and Aditya get closer and the latter agrees to marry her and start a family after they learns about her pregnancy. She then goes to Supreet and tells her after marriage she wanted to tell her this to her first. Supreet removes her hand from her and looks away.

Ginni comes there. Simran also tells her marriage happened with Goldie is how Aditya’s marriage taken place with Ginni. It’s full of lies and betrayal and she dont want Aditya to suffer the way she suffered which shocks Ginni. Ginni opens her mouth but Simran tells that she is carrying Simran’s heir in her womb. Ginni tries to tell everyone the baby is not Aditya’s but Simran doesn’t give her a chance.

Aditya tells Simran that they dont have to give justifications to anyone. Simran tells it’s much needed because then only they can able to throw Ginni out of the house who is a liar and cheater also the Singh’s heirs mother can get a place in this house. Amber shouts at Ginni and asks Supreet to throw her out. Shailaja drags Ginni to the door step saying she will show her the path to her house and pushes her out. Rajvant comes there on time and shouts at Shailaja for her behavior towards Ginni also reminds her she is Aditya’s wife. Simran gets upset with Rajvant’s arrival which stopped her plan to get succeed.

Rajvant goes inside the house with Ginni. Aditya apologises to Rajvant that he has to learn the truth about his decision behind him want to marry Simran also tells this is what he want to tell him earlier that’s why he came to his room. Rajvant asks both Simran and Ginni to go to their room.

Supreet tells Rajvant that media get hold of Aditya and Ginni’s marriage photo even after they tried their best to stop this but failed so now media wanted them to reveal this to everyone but she requested them to wait few more days saying they are planning for the reception so whether they like Ginni or not they have to do this all to save their reputation. Shailaja and Amber questions Supreet and Rajvant remains silent.

Supreet further adds that they have to make sure no one knows about Simran’s pregnancy. Ginni comes there and tells them that she heard Simran telling someone over the phone call the child is her womb isn’t Aditya’s. Aditya asks Ginni to stop her nonsense and drags her inside their room. He asks her even he wants to know even after all the things she has done had she regretted about her actions or not. Ginni pleads Aditya to believe her but Aditya refuses and insults her. He also tells Ginni that he never thought she will stoop this low. Outside the room Shailaja tells now they have to wait until Simran gives birth to the child because then only they can able to do DNA test.

Supreet tells they have to stop both Ginni and Simran going out of the house and tells they have to stop Simran from going to police station to file a case against Aditya. Ginni says to Aditya that she never lies and asks him to think why she is talking like this when she regretted her decision to marry Aditya after learning the truth. Aditya tells her its because she wanted to be his wife. He also tells her that she already broke his trust with her actions so there is nothing left. Until now he had a respect on her thinking she is an independent woman but today she proved that wrong too and leaves the place. Ginni cries.

Precap: Aditya takes the fire torch in his hand and about to burn his hand but Ginni stops him. They both gets into an argument. Aditya asks Ginni to give him a one reason to trust her. Ginni looks on.

The episode starts with Ginni praying God to show her a ray of hope and show her a path to make everything normal. Akash goes to Ginni. Ginni questions Akash why he is holding one cake and in another screw driver. Akash tells he used to use screwdriver to malfunction his toys and the cake is for her. He also adds that since night Aditya didn’t had any food and whenever he is hungry he cooks on his own but the kitchen utensils or any machine doesn’t work then he will get furious. He want to use the screwdriver to malfunction the cooking machine and asks her to have food fast. Ginni thinks to herself that not only Aditya but the entire family hadn’t had any food so she decides to prepare food for everyone. She goes to the kitchen.

Akash follows her and asks her what is she doing here. Ginni shares her plan to cook food for everyone including Aditya. Akash tells that she doesn’t know the meaning of revenge? She is supposed to trouble Aditya not to help him. Ginni tells Akash that she is an Angel right so her character isn’t supposed to trouble other’s. She then tells that she cant see anyone hungry so she is going to make aloo paratha for everyone seeing that itself the anger of people will decrease. She then starts preparing. Supreet comes there and asks her what is she doing.

Ginni tells that she is planning to cook for everyone because no one had dinner yet. Supreet asks her dont she know the ritual and daughter in law of the house who is from Singh family is supposed to cook Kada prasad first. She become Aditya’s wife who is the first son of the Singh family despite how the marriage taken place she dont want to insult their culture so asks Ginni to make prasad first. Ginni obliges.