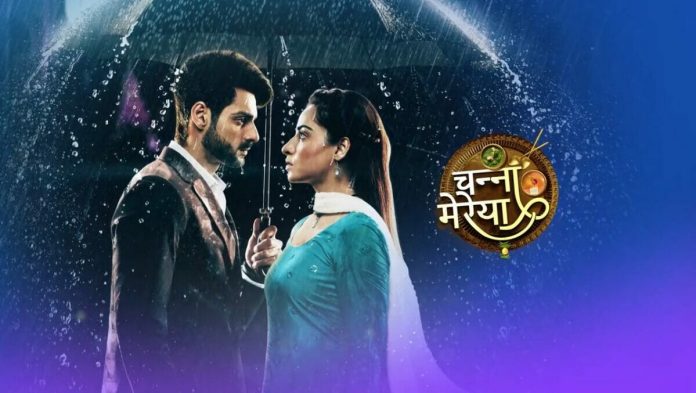 The episode starts with Rajvant says to Sam she is Aditya’s friend so she can stay here and asks Shailaja to take her to guests room. Sam thanks him then requests Aditya to help her take her bags to the room and leaves the place. Aditya and Armaan takes the bags to guests room. Everyone looks on. Armaan asks Aditya what is Sam’s motive behind her this act because all of sudden she is acting like his girlfriend.

Aditya tells Armaan that he will respect Rajvant’s decision so let stay here for a while also asks him to book a ticket to Vancouver for her soon. Armaan agrees. The other side Ginni looks upset and Gulraj asks her not to. Ginni tells she wants to cook food like her father but nowadays its not working on her favor as she unable to cook properly. She also adds that she wishes that they have her father’s cooking instruction book though.

Gulraj tells her that she knows whenever she gets upset that because she is unable to reach the level of her father’s cooking skill. She also reminds her all their cooking utensils are still in the Singh’s house and tells neither she is taking those here nor she letting her go there to bring those here. Ginni doesn’t say anything. She then wonders where Goldie is because he is nowhere to be found. Ginni and Gulraj looks stressed.

Amber angrily says to Supreet that Aditya very well know the importance of his marriage alliance with Cheema’s yet be bought his girlfriend here. Supreet tells him that Aditya told them she is just a friend so asks him not to worry but Amber refuses saying he isn’t a fool to believe Aditya. Supreet tells him Aditya is a young man so let him enjoy his life also assures to bring him to track and asks him to relax. Amber gets happy and obliges not to stress about this matter anymore.

Shailaja tells her husband that she knows well that Sam isn’t just a friend to Aditya. They may act all they want but none can get away from her eyes. She also adds that years back even Supreet entered the house as Amber’s girlfriend and now she become a daughter in law of this house.

She also says that time Gurkeerat suffered a lot and now its Amber’s turn to suffer like his late wife. She then scolds her husband for not paying attention to her ranting. Her husband tells her that she is wasting time telling all this to him as he have no interest in any of this. He also tells her that he need a water so asks her to send this to their worker. Shailaja gets upset and goes to bring water for her husband. She then sees Sam is entering Aditya’s room and closing it.

Sam from her spot sees Shailaja has seen her so she says that this enough to create an illusion in Shailaja’s mind to get what she wants though. Shailaja praises herself for able to know everything whoever tries to hide their secret. The other side Ginni tells Gulraj that she made payment to all their workers and she will pay the half of the debt amount to Jagga and ask him time to pay remaining. She then sees Goldie is nowhere to be found so wonders where he must have gone.

Shampy tells Ginni that Goldie must be enjoying with his friends also tells her about his school picnic and suggests her to pay Jagga later and give him this money to go for picnic. Jagga comes there and scolds Shampy. He then praises Ginni for keeping her words. He then asks Shampy to be like Ginni not a helpless one who will trouble his family.

Ginni gives him cheque and assures him she will return the remaining money soon. Jagga advices her to live her life not to waste in on people like Goldie and Shampy just because they are family. Ginni tells him that he misunderstands and tells this isn’t a burden for her and tells they all knows their responsibilities and as a family they will do everything together to live a happy life. Jagga leaves the place.

Goldie returns home while Ginni decides to go and search for Goldie at mid night. He tells her that he knows she must have thought he harmed himself or not. Ginni denies it and goes and brings him water. Gulraj asks him where he went. Goldie tells his instinct says Simran is here so he went to search for her but he failed to find her.

Gulraj tries to tell him that Simran is not here but the latter refuses to listen to her also threatens to end his life if Simran finds someone else. Ginni scolds him for talking negative and assures him that Simran will return to him soon. Goldie hugs both Ginni and Gulraj and they both looks on worriedly. The next day Aditya sees Sam is arranging the table for breakfast so he asks her not to do it. Sam acts and says she wants to become his wife.

Aditya warns her then leaves the place. Sam goes to Supreet and praises her personality. She also tells her that she will clear the misunderstanding between her and Aditya. Supreet thanks her and asks her hatred for Amritsar. Shailaja interrupts before Sam could say something and takes her with her. Ginni comes to take her utensils from Singh mansion.

Aditya helps her but they both gets into an argument so he goes inside leaving her alone. Ginni scolds him. Shailaja tells Sam that she has seen her entering Aditya’s room late night and asks her not to worry saying she is modern too. Sam gifts her bracelet so she tells her that they can show this to her boyfriend and takes her to the kitchen.

Aditya sees Rajvant and Akash interaction also Rajvant expressing how he is unable to have food which he likes the most due to his age. He goes to the kitchen and starts preparing something. Armaan tells Aditya that they have to find why Sam is here what she actually wants. Ginni decides to return the pan of Singh’s house to them. Armaan leaves the kitchen when he gets a call.

Ginni misunderstands the kitchen got fire and Aditya is inside so she rushes to save him. Simran and Shailaja enters at the same time. Seeing Ginni there Sam goes and hides herself. Aditya falls on Ginni and they both looks at each other. Then they both gets up and Ginni decides to walk past him but her get stuck in Aditya’s shirt button. They both stares at each other.

Precap: In the restaurant Aditya asks Sam why she is acting like this what she wants. Sam asks him to buy her a lemonade because she isn’t feeling well. Ginni comes to the restaurant in hope to convince the owner to get their order. Aditya and Ginni bumps into each other. Aditya gets upset. Later Simran tries not to get noticed by Ginni. She falls to the ground while try to walk past which leads Ginni to help her. They both gets shocked seeing each other.

The episode starts with Gulraj slapping Goldie and asks him to realise that his wife is a selfish woman who will never return. She then asks him to fight just like Ginni fought with Aditya and pleads him to try to be become a good hardworking person for their family. Gulraj then tells Goldie to forget Simran and tells that she will remove all the things that will bring her memory to him or anyone of the family members. She takes the photo frame and puts it into the fire. Goldie gets shocked and tries to take the photo frame from the fire.

He cries seeing its burnt. Ginni asks him is he crazy. Goldie tells he will go crazy for any real if anyone repeats this again. Ginni assures him that no one will hurt his feelings hereafter also says that she will change the photo frame of Simran. She then calls out Dimpy asking her to bring first aid kit with her. She also asks Dimpy to aid Goldie’s wound. She and Gulraj looks upset and sad.

In Singh’s mansion Amber and Supreet looks at the jewellery and Amber starts praising Supreet for being a beautiful and luck wife of his and says anyone can be happy to have her in their life. Shailaja comes there and asks them why they both looks so happy even she wants to know the reason behind it though. Amber asks her to call the family members to living room because he wants to make an important announcement.