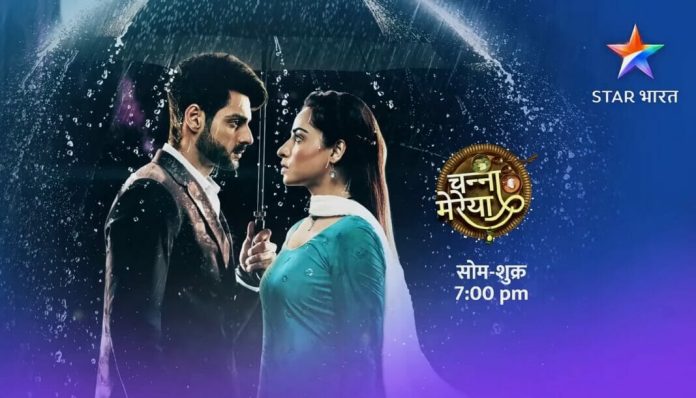 The episode starts with Aditya removing Ginni’s hair from his shirt button. He asks her what is she doing here. Ginni tells that she isn’t interested to come here. She thought the kitchen caught fire. Shailaja comes there and starts scolding Ginni for trying get Aditya’s attention and warns her not to try to get closer to Aditya because now he has a special friend with whom he is going to start his new life. Aditya gets annoyed and asks Shailaja to stop linking his name with every girl she sees with him. Shailaja laughs and says she isn’t doing like that and tells him that his special friend is here and takes him with her nearby the kitchen’s door. She calls out Sam but the latter refuses thinking if Ginni sees her then her plan will get ruined.

Shailaja takes Simran to Aditya and asks her to tell what she wants to say to Aditya. Ginni searches for her watch which she finds it nearby kitchen cabinet. She was busy cleaning that she fails to notice Simran. Sam looks nervous seeing Ginni who is facing the other side. Shailaja goes to Ginni and drags her out. Aditya tells Sam that they can talk in the room and take her away from the kitchen. Shailaja tells her husband to learn something from this youngsters.

Aditya tells Sam if she thinks that she can get in the good side of Supreet and Shailaja will help her become his wife then she is wrong because he isn’t going to marry her. He also tells her that he was clear then now also clear about his thoughts so he made Armaan book tickets for her to go to Vancouver which is tomorrow. He then tries to leave but Sam stops him saying he is supposed to ask her before he take decisions misunderstanding her intentions. Aditya asks her to tell what she wants to say. Akash comes there and scolds Aditya for being in Rajvant’s room and accuses him of snatching others rights then leaves the place taking his things.

Aditya asks Sam to meet him in the Garden restaurant because this isn’t a right place to talk about this then leaves the place. Other side Goldie gets hurt while making prasad to plead God fulfill his wish. Ginni scolds him for not paying attention and asks him what is he thinking. Goldie tells that he wonders why God is not letting him meet Simran who is in Amritsar only. Ginni assures him that he will meet Simran. She then reminds him about his meeting with the restaurant manager. Goldie seems lost in thought and pays no attention so Ginni asks him to go home because Gulraj is worried about her and promises to give the prasad to temple. Goldie leaves the place.

Later Ginni goes to temple and talks to the priest about the reason behind this prasad is to pray to God to fulfill Goldie’s wishes. The priest takes the prasad inside to do puja. He then comes out and asks Ginni to serve everyone. Ginni goes to wash her hand. Rajvant comes there and tells priest his idea to conduct a puja in his home the next day. The priest agrees. He then sees Ginni and the latter greets him.

Ginni then gives prasad to Rajvant and those who are entering the temple. The priest praises Ginni to Rajvant and tells him that her cooking skills are replica of her father Kushwant. Other side Aditya puts the mug infront of Sam and asks her to tell what she wants and why is doing all this. Sam tells him that she isn’t feeling well so asks him to bring him a lemonade. Ginni comes to the Garden restaurant to meet the manager to discuss with him about her idea to provide food to their restaurant. Ginni asks one of the waiter and the waiter shows him where the manager is. Inside Aditya asks Sam to stop her acting but the latter asks him to believe her.

Aditya gets frustrated so he decides to buy her the lemonade so he leaves the place. Ginni enters the restaurant. Sam gets shocked seeing her. She hides herself with the menu card. She also sees Ginni bumped into someone. She thinks this is the better oppurtunity to leave the place without Ginni noticing her though. She stands up and move towards the exit but falls down to the floor nearby Ginni. Ginni holds her hand and turn her towards her. They both gets shocked seeing each other. Sam runs away from there. Ginni recalls Goldie’s words and runs behind Simran to find her but fails to see where she went.

Ginni wonders what Simran is doing here not coming to the house if she is in Amritsar only. She then sees Aditya and decides to ask him about Simran’l but decides not to. Aditya notices Ginni. They both ignores each other. Aditya goes inside the restaurant and gets shocked seeing Sam isn’t there. He comes outside and bumps into Ginni. He starts scolding Ginni for meeting her often. Ginni shows Simran’s photo and asks him did he saw her here.

Aditya fails to recognize her then leaves the place after scolding Ginni. Ginni wonders what to do now. She then receives a call from Rajvant asking her to make prasad also the breakfast for the puja he is conducting tomorrow. Ginni hesitates first but obliges. Aditya finds Sam and asks her where she went. Sam thinks before Ginni or Goldie sees her she should has to hide herself. Aditya receives a call from Rajvant asking him to take part in the puja which will take place tomorrow and gives him responsibilities. He also asks Aditya to invite Sam too.

Aditya informs the same and tells her that they can discuss this important matter later because now he has to go to meeting which get preponed today. Sam nods okay. Ginni talks to her father’s photo without even knowing the full truth she cant able to tell anything to anyone so asks him to show her a right path. Gulraj questions her about her worries and Ginni lies to her about making prasad for the Singh’s. The next day Aditya goes to pray infront of the God idol. Sam joins him. She also tells Supreet that she is ready to help whatever she wants. Aditya tells her she helped them enough and takes her outside saying they need to talk something important. Sam thinks to gain Aditya’s trust before Ginni or Goldie finds her. Ginni and Goldie comes to the Singh’s house but fails to notice Sam.

Precap: Aditya asks Sam to stop acting and what she wants even after he made himself very clear he isn’t interested in her. Sam tells him she is pregnant and the father of her unborn child is him. Later Aditya goes to Ginni and asks her suggestion how to choose a right path. Ginni looks on.