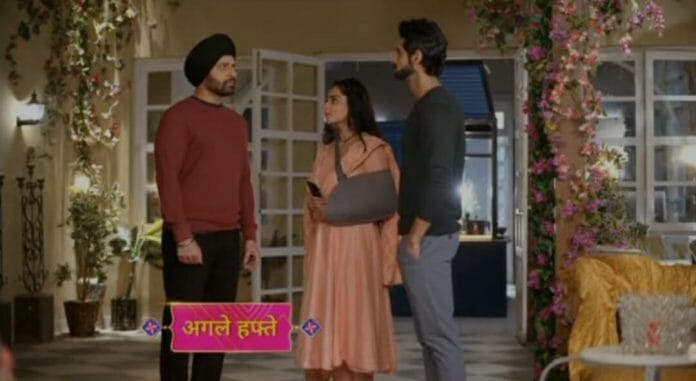 Starbharat’s show Channa Mereya is gearing up with an interesting drama with Aditya agrees to take Amber’s help to find the shooter’s whereabouts which makes Ginni happy. Ginni wonders the reason behind Goldie’s strange behavior. Now it will be interesting to see what will happen next? Will Ginni learn Sam’s cunning plan against her father’s dhaba. Will Ginni stop Sam and Goldie from removing her father’s identity? Will Amber’s truth comes out?

In the previous episode we had seen that Pasha was waiting for Aditya in the living room of Singh’s house. Aditya arrived there and saw Pasha had a pistol with him so he questioned him. Pasha revealed the shooter’s used similar pistol only and they had no clue in order to find them also it was not going to be that easy to find the actual person who was behind all this.

Aditya advised Pasha to ask his men to found out soon the person behind all this. Amber overheard and learned Aditya hired private investigators to find out about him. Pasha requested Ginni to try to recall the shooter’s face then left. Priest arrived at Singh’s mansion. Ginni praised the priest’s effort to provide good quality prasad.

The priest praised Rajvant for helping them. Shailaja bribed Akash by giving him a sweet box in which only Kushwant’s diary was in order to stop him from telling everyone about the sweet boxes she had with her. Simran suggested to make Chinese food in the dhaba.

Goldie supported Simran’s idea which broke Gulraj. Gulraj permit them to do what they wanted to do with the dhaba. Simran got happy. Ginni prayed God to help her find her father’s diary. Amber’s men gave Amber a new sim to contact whoever he wanted to through this.

Amber wondered where must be the diary which he kept it in the sweet box. Akash played skating inside the house while he held the sweet box in his armpit. Ginni saw this and suggested to take the prasad box with him after he played but before she could get the sweet box Aditya interrupted them and gave both her and Akash the prasad.

Aditya encouraged Ginni to recall the incident and let him know whether she found anything that related to the Shooter. Ginni faced struggle but she got happy when she recalled the glimpses about one shooter. She informed the same to Aditya and started describing the shooter. Meawhile the shooter entered the Singh mansion. Aditya got distracted when he saw something. Ginni got confused seeing Aditya’s reaction.

In the upcoming episode it will be shown that Aditya will show Ginni the photos send by Pasha and Ginni will identify the shooter’s face. Amber will get shocked. Later Aditya will go to where the shooter is staying. He will ask the shooter to tell who send him to kill him.

The shooter will ask who he is. Amber will reach the shooter’s place. He will get determined to meet the shooter before Aditya. Aditya will come infront of the shooter and looks at him angrily.