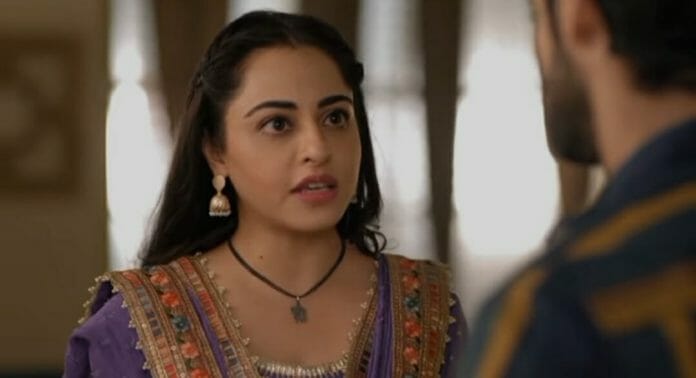 Star Bharat’s show Channa Mereya is gearing up with an interesting drama with Aditya requests the Grewal’s to not to do anything because of which they may lose their business deal but Ginni supports Goldie’s decision to attend the meeting which angers Aditya.

Now it will be interesting to see what will happen next? Will Ginni regret her decision to send Goldie with Aditya for the business meeting? Will Aditya be able to convince Sonia? Will Sonia learn about the Singh’s and Grewal’s dispute?

In the previous episode we had seen that Ginni went to Aditya’s room to took her belongings but she fell on him when she misses her balance. Aditya and Ginni got into an argument. Armaan got shocked when he saw the name plate outside the house also Kushwant’s photo frame in Singh house living room.

He learned through Gurleen about everything that happened in his absence and worried about Aditya and Ginni’s relationship. Ginni realised the door lock got stuck so she tried to open it on her own but failed so Aditya went to help her. They both again got into an argument. Ginni got emotional when she saw her and Aditya’s photo frame.

Aditya opened the door and asked her to leave just then both Singh’s and Grewal’s arrived there. Shailaja shouted at Ginni and Aditya taunted Ginni using this opportunity so Ginni draw a line in the middle of the house and suggested both the family’s to use their respective portion.

Aditya got furious and informed her because of her actions their relationship were becoming irreparable. Ginni acted like ignore his words also splitted Rajvant’s room into two to keep an eye on him to protect him. Supreet and Shailaja shouted at Ginni.

Aditya called Ginni a greedy woman. Armaan pleaded with Aditya to talk to Ginni about her sudden change in behavior but Aditya refused and left the place. Later Ginni and Aditya got emotional reminicising their moments they shared together from their respective rooms.

In the upcoming episode it will be shown that Shailaja will tell Supreet that the Grewal’s have no idea about the importance of this particular business deal. One mistake can change everything and warn her about the consequences of losing not only the business deal also their relationship with Sonia. Supreet will get worried.