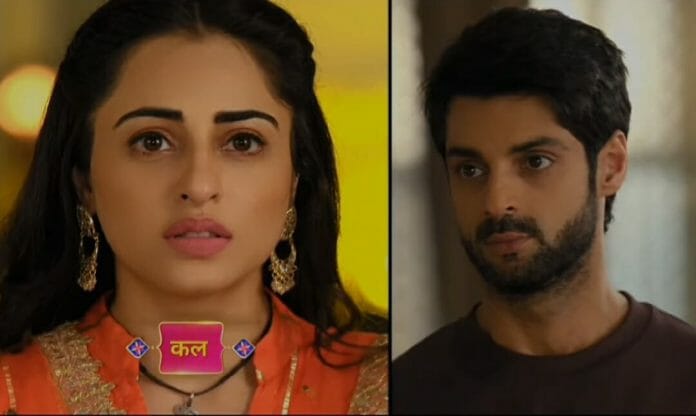 Star Bharat’s show Channa Mereya is gearing up with an interesting drama with Sonia visits Rajvant’s house and expresses her grief for Rajvant to the Singh’s also takes Aditya and Ginni inside and reveals some shocking information to them. Now it will be interesting to see what will happen next? Will Ginni and Aditya join hands to find who is trying to kill Rajvant? Will Rajvant health improves? Who is behind Rajvant’s life?

In the previous episode we had seen that Aditya and Ginni became sad recalling the moments they both shared together also whatever happened after the truth about the diary was out. Ginni took Aditya’s shirt with her and decided to sleep outside Aditya’s room.

Aditya arrived there and questioned Ginni for going against her own wish. Ginni explained him the reason behind her decision to sleep outside. Aditya taunted her and went inside. They both fell asleep. Ginni had a nightmare because of which she worries about Rajvant’s safety so went to check up on him.

A mysterious person who tried to enters Rajvant’s room hide after noticing Ginni. Ginni got relieved seeing Rajvant safe and sound. Marleen and Shailaja bumped into each other and questioned each other for still not went to bed. The next day Gulraj accused Shailaja for cutting their gas pipe but the latter acted and said it was not her. Ginni decided to cook in a wooden stove which made Shailaja upset.

Supreet convinced Aditya to have food which relieved Ginni. Supreet and Aditya discussed about their business partnership with Rajvant’s friend Sonia also the deal they were about to finalise but worried about the current situation of the house which might impact their deal.

Later Aditya requested Ginni to not to create a scene infront of Sonia but got annoyed by her reply. Later Goldie decided to attend the business meeting with Aditya but the latter refused to took him with him which lead an argument between both the family’s.

Ginni supported Goldie’s decision which made Aditya upset so he left the place followed by Goldie. Supreet advised Ginni to not to show Sonia the differences between them at the time of visit to their house to finalise the deal which angered Ginni.

In the upcoming episode it will be shown that Aditya will bring the doctor to check Rajvant. Amber will enquire him what happened to him? Aditya will reveal to him that Rajvant got consicous but he said to him that someone trying to kill him.