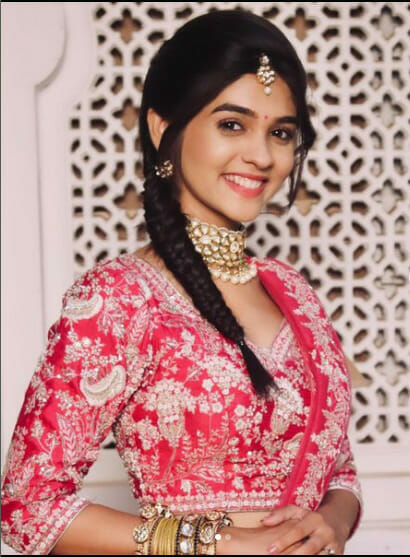 Actress Pranali Rathod’s popularity is growing with leaps and bound post she entered in Yeh Rishta Kya Kehlata Hai. She made her place at industry by playing grey in colors show Barrister Babu.

Character Akshara Birla is earning more fame to Pranali. In short span she hit 1.4M insta followers and counting. She has become one of the unstoppable young actresses currently. Her hard work is seen in her craft.

Apart from acting, actress beautiful voice is making her world famous. Recently, actress sung ‘Kaisa Hua’ song from Kabir Singh. Her melodious voice so far has received a good amount of social media engagement. Actress voice was also praised by singer Amaal Mallik, who is hosting Star Plus show ‘Ravivaar With Star Pariwaar’. “I think she killed it… Such a sweet girl & such a beautiful voice

Social media users are using her voice in their reels. It’s surely an absolute music to the ears. Check out the reel if you haven’t heard it yet.

Pranali fans off lately trended Pranali Winning Hearts. Hastag trended on twitter. The song sung by her is going viral. Actress has become a social media sensation now. Fans finding it hard to get over from the soothing voice of Pranali.

On work front, she is paired opposite to Harshad Chopda. Matching Harshad’s intensity in the show is earning her separate fan base. Pranali and Harshad is telly town favorite couple presently. Both are delivering best of Abhira [Abhimanyu and Akshara] in the 13 years old show Yeh Rishta Kya Kehlata Hai. In the recently held International Iconic Award, ABHIRA bagged BEST JODI award.

Pranali and Harshad’s starrer is high on drama. In the recent episode, Abhimanyu learn that something is wrong with his hand and undergoes MRI. He hides about his hand injury from Akshara. Elsewhere, Arohi risks Vihaan’s life by giving wrong injection. Abhimanyu is accused for Arohi’s deed.

The upcoming will be interesting when Akshara will expose Arohi. Arohi will lose her job. She will vow to destroy Akshara and Abhimanyu. How Abhimanyu and Akshara will handle the situation will be entertaining. Keep watching the show mon-sat on Star Plus, 9:30 PM.