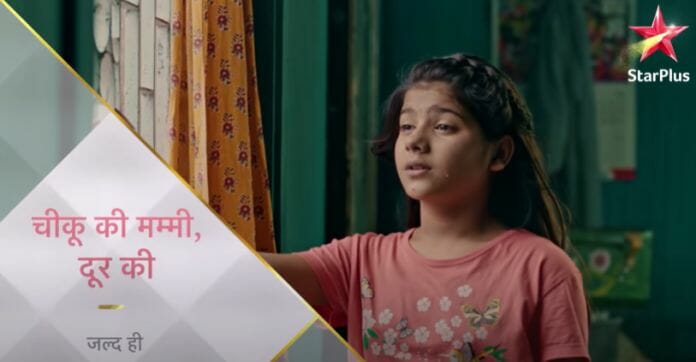 The episode starts with Sameer asking Pushpa if Chikoo slept. Pushpa agrees and asks him to sleep. Sameer tells he is unable to sleep because of fear of losing Chikoo after seeing her with Nupur. Pushpa says God will save them. Sameer says this time we are wrong so god won’t. Pushpa says she has to get punishment as she did a mistake and she tells she doesn’t have the strength to see his broken state again. Sameer asks what can they do. Pushpa says we have to do something and let’s lock Chikoo in the house or let’s shift to another city.

Sameer says it’s not good to make her prisoner and I will love Archiee so much that she will stay here with her will but what can we do if Chikoo regains her memories. Chikoo gets flashes of her moments with Nupur. Chikoo and Nupur wake up remembering each other.

Next day Sameer praises the taste of poori and asks Chikoo why she is not eating. Chikoo tells them she got a dream of some aunty who used to love her so much but I didn’t see her face. Sameer says it’s just a dream and you can see her face later. Chikoo says she wants to know who’s it. Sameer says it can be your Mom as you’re missing her. Chikoo tells she loves her to Sameer’s wife photo.

Deepu says I love that Sameer but I don’t like kids. Nupur tells her she can become Mom to that kid. Deepu tells she doesn’t like it. Tai says don’t listen to Nupur as she doesn’t know how to take care of her kid, but advising you and she asks Mini to pack her bags. Deepu asks her to give advice then Rama tai asks her to join Sameer daughter in boarding school post her marriage. Nupur gets angry and she says kids are equal and why you’re talking bad to Mini too. Tai says I take care of her thinking Joshi which is not. Nupur shouts at her to stop.

Doctor checks Chikoo and tells her she can run. Chikoo says she can’t. Doctor asks which games she likes. Chikoo tells luddoo and playing the piano. Gajak takes her to play piano then Sameer asks the Doctor about Chikoo’s condition. Doctor says Chikoo has far in her heart which we have to remove otherwise she doesn’t get strength in her muscles.

Nupur says until now I thought you’re good but you’re a cheater and Sameer is not Joshi and you can forget your rules for your daughter. Tai says Sameer as his name. Deepu says true he is a superstar and rich. Nupur says that’s what I’m saying you just care about money and she assures Mini that she doesn’t face any bad situations like Chikoo and she tells Mini is not an orphan and helpless. Tai cries. Deepu supports her.

Friends of Pushpa arrive to the monthly hangout. Chikoo tells them she too wants to meet her friends. Friends of Pushpa asks her to enjoy with them. Mini asks Nupur to teach her dance. Nupur agrees. Chikoo enjoys seeing them dance.

Sameer signs Gajak and they too dance along with Pushpa and her friends. Gajak asks if he thinks it will work. Sameer tells it will work. They tells poonam is not teaching properly. Chikoo asks them to not let their mood off and she tells them that she knows the steps and teaches them. Sameer and Pushpa smiles. Nupur teaches dance to Mini and Kamini sees them.
Episode ends.

Precap – Nupur recognises Chikoo voice and asks if she is her Chikoo.