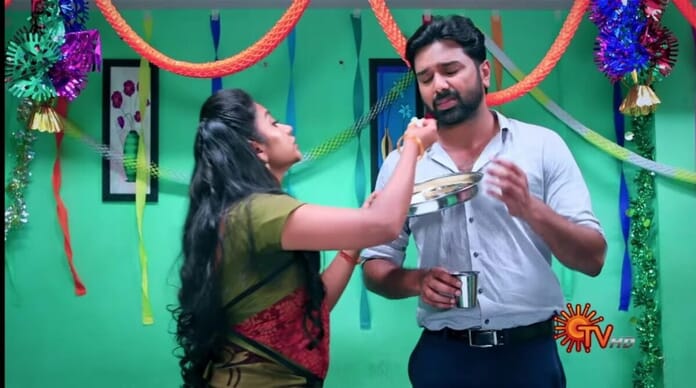 Sun TV’s much-loved show Chithi 2 is getting interesting with every episode. Currently, viewers are witnessing that Venba and Kavin left Mallika’s house and living in a separate house for rent.

In the previous episode, it was seen that Venba and Kavin decided to invite Gowri for the house warming ceremony. Venba phoned Gowri for the same. Mallika and Yazhini overheard their conversation. They argued with Gowri and threatened to commit suicide if she attend Venba and Kavin house warming ceremony. Gowri agreed to not go without any option.

Venba was about to light the lamp but a photo frame fell over the lamp breaking it. Venba got shocked on seeing this. The neighbors told them that this was a bad omen which made them feel bad. Kavin and Venba looked worried about what to do.

In the upcoming episode, it will be shown that Anbu will find Kavin and Venba’s location and will come to see them. He would bring a lamp with him. Venba will get glad seeing this and will use that lamp and will complete the puja.

Later Mallika and Yazhini will find Kavin’s whereabouts and will come there. Mallika will vow to ruin Kavin and Venba’s happiness. Other hand Venba says that they’ve started living independently and no one can snatch it away from them. Venba and Kavin will share some light and romantic moments together.

Stay tuned with us for the more latest updates of your favorite Tamil shows.