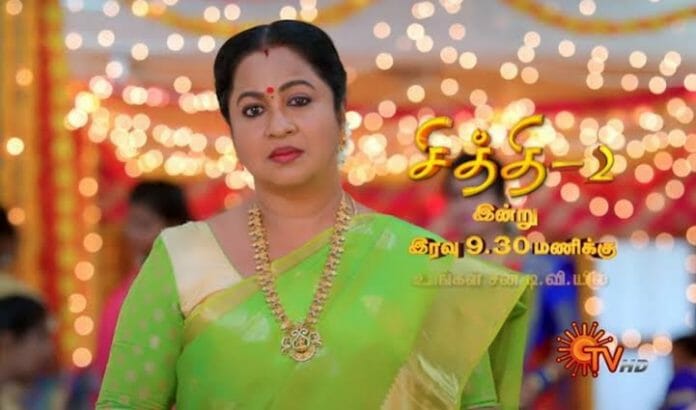 The episode starts with guests arriving for pooja. Everyone congratulates Kavin and Kavin greets them in. Iyer hurries that the auspicious time is running but Venba is adamant that she prayed God and Mallika will definitely attend the pooja. Both Kavin and Venba asks coffer from Ravi and Ravi goes to get it. Mallika comes there with the family. Dharma asks Mallika to rethink her decision but Mallika is a adamant. Yazhini scolds Dharma for supporting Venba. Mallika and Yazhini leaves first. Gowri scolds Dharma for not trying hard to stop Mallika. Mallika and Yazhini bumps with Ravi and Mallika scolds him for betraying her by giving laughing gas to her during auction. She fires him but Ravi says that he has already sent his resignation letter to her through mail. He says he’s employed at Kavin’s company and says that he’s going to give coffee to Kavin and Venba. Mallika asks Yazhini to stop Ravi as they could mix the drugs in the coffee. Yazhini stops Ravi and Mallika diverts his attention. She puts the drug in one of the coffee and Ravi leaves.

Ravi gives the coffee to Kavin and Venba and says about Mallika’s presence. Mallika comes there and Subbu says that she proved Venba right. She asks whether she got submissive after getting in auction by Venba. Mallika and Yazhini control their anger while Ravi gives coffee to all. They all have it. Kavin mocks Mallika referring her as third person who graced her presence in the event. He introduces Subbu lakshmi to her as someone who brought him up until the age of 5. He says that she’s the one who completes the role of a mother in his life. He then introduces Natraj as his father figure who guided him and is the reason for what he is. He says that God sent angels in his life are them and mocks Malika. Dharma asks them to not talk about past. Venba taunts him too saying that the backstabbers made them this way referring to him tok. Mallika thinks that soon one of the two going to faint and mocks them in Mind. Venba calls Mallika to light the lamp.

Yazhini asks Malika whether she give the right drug as both didn’t faint yet. Mallika says it’s the right one and asks her to wait. Pooja starts and everyone start lighting the lamp along with Mallika, Natraj and Subbu. Ceremony commences well and Iyer continues with the pooja. He shows coconut flower in the coconut and calls it a good sign. Yazhini and Mallika still wait for one of them to faint. Iyer recites chants.