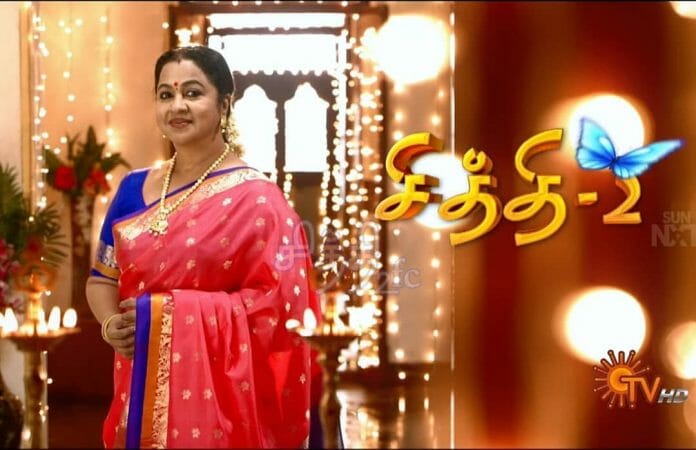 The episode starts with Kavin asking for his third kiss. Venba is about to kiss him when she notices her neighbours watching over. They both run inside shy. Mallika, Yazhini and Dharma are sipping their coffee. Mallika lashes out at Dharma for no more having the same fierce despite seeing her getting insulted.

Dharma refuses her claims but Mallika says Venba is winning constantly after he woke up from coma. Dharma says he couldn’t predict her moves and Mallika says he underestimated Venba. Yazhini looks doubtful at Dharma and agrees with Mallika that Dharma has soft corner for Venba. Dharma refuses and says that he has only soft corner for Kavin. Mallika asks him to not consider that that too as he called her Madam and Subbu lakshmi his mother. She’s really hurt about it.

Mallika warns him to not let them complete even a single project as Venba would easily earn 1 crore if it happens. She asks them to keep a watch on them while she also will do whatever needed. Waiter comes and Mallika asks for bill. Waiter says its already paid. Malika goes out to find who’s it and spots Kavin and Venba there.

Kavin says that he atleast respect her enough to speak with her but he don’t deserve that too. Mallika gets angry at Kavin but Venba proclaims that she’s now a owner of the company and is just treating her competitor. Mallika’s throws insulting words at her and Venba gives it back. She pretends like they are very busy and leaves with Kavin. Mallika thinks they something is waiting for her.

Singaram and Ravi complaints that everyone are protesting in office without doing any work. They say that they are just playing and enjoying. Kavin enters and witnesses the same. They say that they’ve salary pending for two months and refuses to work without settling it. Venba threatens to hire new employees but they warn to not let them work as they have Union. One person gets personal and Kavin warns him. Another guy hits him with paper weight.