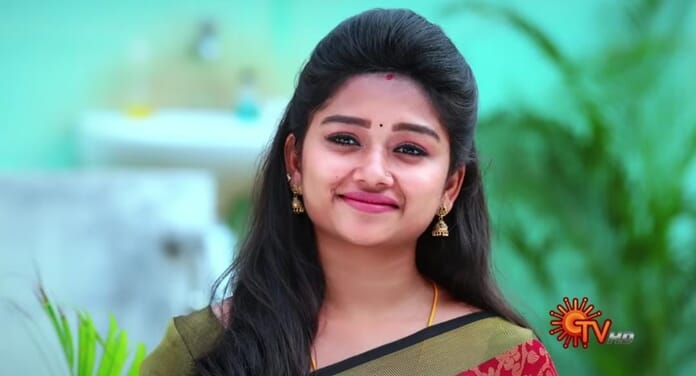 SunTV’s popular show chithi 2 has gained popularity even since Kavin and Venba got married and confessed their feeling for each other. The show’s current storyline is Kavin and Venba left Mallika’s house when the latter insulted Venba and challenged to Kavin earn one crore rupees on his own. The couple found a house for rent after lot of obstacles created by Mallika and Yazhini and they were the house warning ceremony.

In the previous episode, it was seen that Venba noticed the lizard in the milk and stopped Mallika, Yazhini and the guests from drinking the poisoned milk in time. Mallika scolded Venba. She said that Venba doesn’t deserve to be a head of the family. She added that Kavin could have jailed for Venba’s mistake. Mallika got ready to leave. Shivani’s mother stopped Mallika and requested her to bless Kavin and Venba. Mallika refused. But the circumstances made Mallika to throw the rice and flowers petals over Venba and Kavin. The couple get elated while Mallika and Yazhini get shocked. Later at home Mallika and Yazhini vent out their frustration. Gowri overhead their conversation and mocked them.

In the upcoming episode, it will be shown that Venba will wake up and will come out. She will that kopam has been put in front of the house. Then she will notice Kavin washing her clothes by hand. Venba will go to Kavin and will stop him. She will ask why he’s doing this work. Kavin will ask what is wrong in washing the sarees of his wife. Shivani will say that Venba got a good husband. Venba will smile.

Keep checking this space for more updates on your favorite Tamil shows.