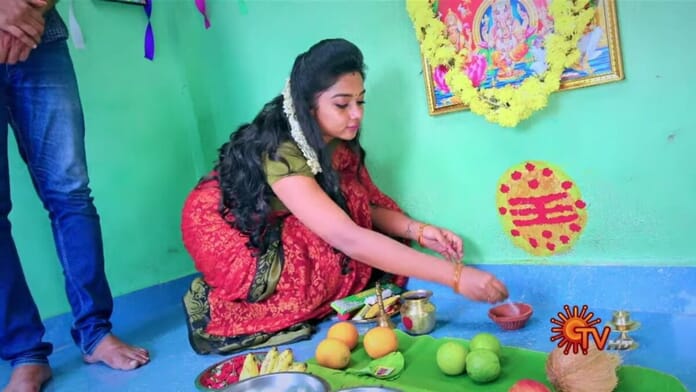 Sun TV’s much loved show Chithi2 is gearing up for more drama with Mallika plotting against Kavin and Venba.

In the previous episode it was seen that Kavin, Venba and Ravi went to buy the necessary things for the house. Mallika and Yazhini spotted them. They got shocked realizing Kvin and Venba got a house for rent. Mallika fumed wondering how it could be possible when her goons threatened all the people in that area to not give house for Kavin and Venba. Mallika decided to follow Kavin to know where they’re staying and planned to threaten the house owner asking to vacate Kavin and Venba. However Venba noticed Mallika and Yazhini. They got inti an auto. Vennila got rid off Mallika by telling the auto driver to take many turns.

Later on Venba went to invite Shivani’s parents for their house warming ceremony. Venba got sad when they asked if her and Kavin’s family attend the ceremony. She lied to them that they will. Kavin noticed Venba sad and questioned her about the same. Venba said that she wishes that anyone from his or her family attend the fmaily else they will get humiliated in front of their neighbors.

What will Mallika do now? Will Kavin and Venba win against Mallika’s evil plan?