Seher tells Meher that Kulwant brought so many gifts for her. Harleen tells Seher that now Meher should not see the bangles Kulwant brought for her. Kulwant asks Meher about Sarab. Sarab comes there so Kulwant gives gift to him. He tauntingly tells her that she cares about his life more than God. Kulwant blesses Meher. Sarab asks her that seems like she is not well that’s why sweating a lot. Kulwant thinks why he is talking like this with her and asks him that why he is behaving like this. He thinks he really want to expose her now.

Kulwant thinks what if Sarab knows the truth and decides to talk to him. She scolds the maid for not cleaning the floor properly. Sarab is about to fall because of the slippery floor but prevents himself from falling. He asks Kulwant that no matter what she do but she can’t make him fall. Kulwant tells him that she won’t even think to hurt him. Meher tells her that Sarab just teasing her. Karan searches his sehra and finds Ranna and Bittu there and asks them about his sehra then he takes the pendrive with him.

Yuvi asks Param to give overboard to play once. Karan comes there and asks Param to return his sehra. Param gets confused hearing him. Seher tells Karan that his sehra must be in the play room. Karan tells her that it’s not there because Param stole it from there. Param tells him that he didn’t steal anything. Yuvi asks Karan to believe Param. Param teases Karan saying that the latter can’t become sarbala without sehra.

Meher asks Sarab that what happened to him because he is behaving strange since morning and informs him that she hired detective to investigate the case and tells him to just enjoy the marriage ceremonies. He thinks he should tell Kulwant’s truth to her and they hears Param’s screaming.

Param cries in pain and blood comes from his mouth. Dolly and Harleen asks Param that how it happened. Harleen notices that Param’s teeth broken. Meher gets worried for Param. Yuvi reveals that Karan’s sehra is missing. Seher tells them that she pushed Karan and Karan fell on Param. Sarab takes Param to the hospital. Dolly asks Seher to tell the truth.

August 3, 2021
Molkki 3rd August 2021 Written Update on TellyExpress.com Episode begins with Purvi brings Virendra to the hosptial and admits him there and asks the... August 3, 2021
Muskan Bamne is having a good time playing Pakhi in the superhit Star Plus series Anupamaa;" She is a spoilt child always having her... 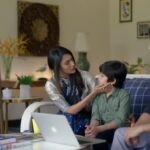 August 3, 2021
Qurbaan Hua Spoilers, Upcoming Story, Latest Gossip , Future Story, Latest News and Upcoming Twist on tellyexpress.com This show is turning out to be something...