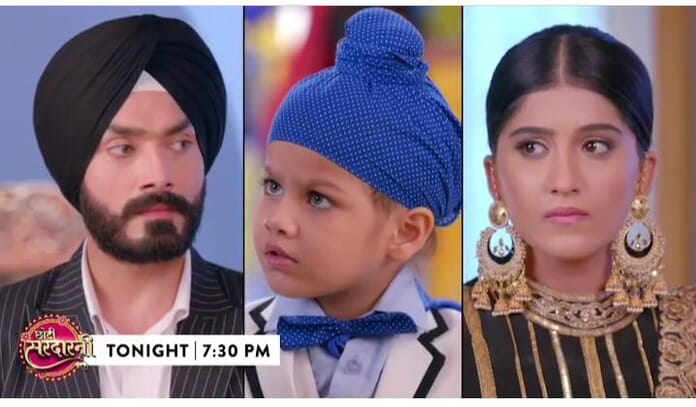 Today’s episode starts with Meher, Sarabjeet and others celebrating Diwali. Harleens ask Rovi why ge is at home and didn’t go to play cards. Rovi says he wanted to spend time with his family. Kulwant comes at Sarabjeet’s home for the Diwali party and meets Dolly. Dolly and Kulwant does their regular nok- jhok. Ahead, Neerja sees Param in Kulwant’s arm and ask her who is she. Kulwant says she is Param’s grandmother. Neerja says Param is her grandson.

Kulwant and Neerja do verbal fight and Neerja gets angry on Kulwant. Meher and Sarabjeet come and Sarab about to explain to Neerja but Neerja takes his leave but stops and tells to Kulwant that Param is her daughter Simran’s child thus he is her grandson. Kulwant stands shocked.

Afterwards, Neerja questions Sarabjeet why there is no picture of Simran and Param in the house in spite he has promised her. She gets emotional. Sarabjeet stands speechless and recalls the flashback. Other side, Bittu tells to Jitto that he has made a plan against Kulwant and tomorrow she will get a heart attack.

There, Meher shows Simran’s picture to Param and makes a story to introduce him to Simran. Sarabjeet over hears Meher and Param’s talk.

Later, Sarabjeet yells at Meher for telling Param about Simran. He says to her that in few days she will leave and Param’s life will get complicated more. Meher gets teary.

She says to Sarabjeet that Simran is Param’s mother and none can change the fact. She further says, she wasn’t able to spark the hate in Param’s heart for her but promises to ingnite love for Simran in Param’s heart before leaving. (Episode Ends)

Precap: Bitto bumps into Sarabjeet and photographs of Meher and Manav falls. Bitto gets scared.