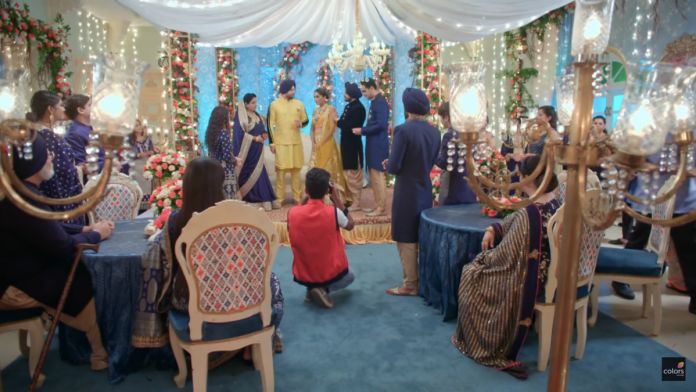 Colors TV popular show Choti Sardarni is gearing up for some high voltage drama . The show now focuses on Sarab and Meher’s children Seher, Param and Karan who are grown up after the leap. Earlier it’s seen that Didiji planned for Seher and Rajveer engagement while they both checked CCTV footage to find Kunal. Now it will be seen that Seher and Rajveer will get engaged while Kunal will be on a run for his life.

Previously we have seen that, Rajveer and Seher planned to act like agreeing for the marriage so that they could get time to find Kunal. Kunal got falsely alarmed that it’s Gill family who kidnapped him as they didn’t wanted him to marry Seher. Rajveer questioned Didiji about the difference in the immigration list and Kunal’s passport and Didiji got scared of getting exposed. She decided to perform Seher and Rajveer’s engagement the next day in order to stop Seher from reaching Kunal. On the other hand, Rajveer and Seher checked airport’s CCTV footage in order to find Kunal in it.

In the future episodes we will witness, Rajveer and Seher will not find any footage that will prove that Kunal reached the airport. The immigration officer who helped Seher will be transferred but she will leave a clue for Seher to search the CCTV footage of the hotel opposite to the airport. Bobby will assure Nikhil that Seher and Rajveer will not get the hotel CCTV footage at any cost. On the other hand, Masiji will demand to do Seher and Rajveer’s engagement the next and Kunal and Param will agree. Later Kunal will escape from Didiji’s clutches and will be on run for his life while Seher and Rajveer will her engaged.

Will Kunal reach Gill mansion on time? Will Kunal gets rescued? Will Rajveer learn about his sister’s true face?