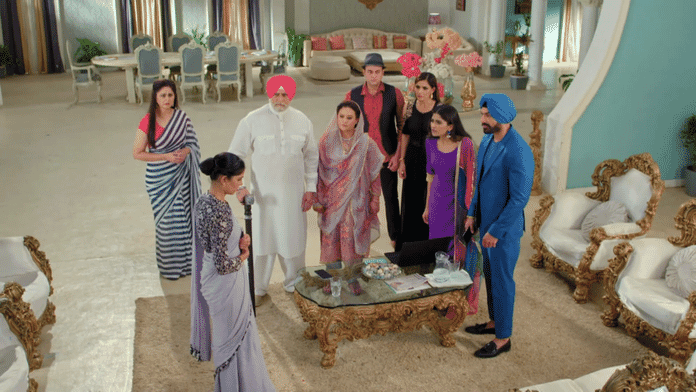 Colors TV popular show Choti Sardarni is gearing up for some high voltage drama . The show now focuses on Sarab, Meher and their children. Earlier it’s seen that Sarab saved Karan while Amrit provoked Param to instigate him against Sarab and Meher. Now it will be seen that Sarab and Meher will bring Karan home while Daarji will motivate Sarab.

Previously we have seen that, Karan tried to catch Delhi train and had gone to buy tickets. Few kids stole things from him and locked him in bathroom. Sarab and Meher got clue that Karan is in railway station.
They rushed there but couldn’t find Karan who’s locked in wash room. Kulwant laughed seeing Meher’s state while Karan risked his life by walking on railway path. Sarab saved him on time before train could hit him.

Karan askdd him why didn’t he save him from kidnappers last time. Meher and Sarab was shocked upon hearing it. Later, Amrit tried to instigate Param against Meher and Sarab.

In the future episodes we will witness, Karan will recall Kulwant’s words and will lie that he got kidnapped in dream and Sarab didn’t save him. Meher will say Karan that Sarab will definitely save him but Karan doesn’t believe her.

They both will bring Karan home and Meher will get angry at Amrit for instigating Param against Karan, Meher and Sarab. Daarji will console a distraught Sarab and will announce prize money for anyone who will make Karan laugh. Everyone will try various things but it will not work and finally he will smile seeing Amrit fall down. Daarji will announce that Amrit is the winner. Later, Sarab will question Geeta.

Will Sarab learns about Geetha? Will Kulwant’s plan gets exposed? Will Karan trust Sarab?