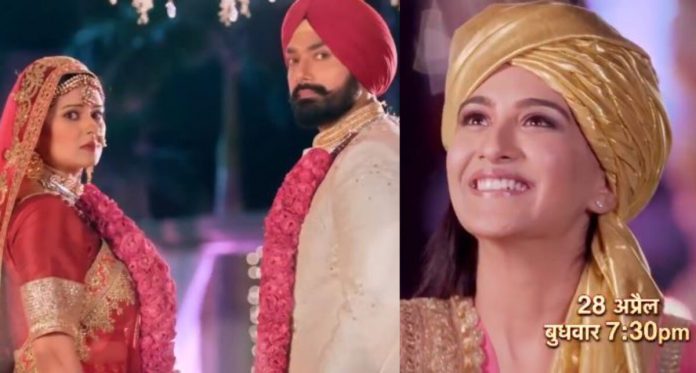 Colors popular show Choti Sarrdaarni is going to witness themost awaited scenes as now Meher will be seen returning with a bang. It’s sure that upcoming episodes will rejoice #SabHer fans. But is any twist ahead in this too? Let’s see, what happens next.

In the last episode, Kids returned to their house and Kulwant asked what happened. Kulwant got shocked knowing that some people threw stones on kids, Sarab and Sandhya. People also accused Sarab and Sandhya of affair. Hospital staff decided to transfer Meher.

Next day Harleen tried motivating tensed Sarab. Bittu accused Ranna of loss in business. Ranna requested Bittu to not tell anybody. Jeeto mocked Ginni. Kids showed the toys made by Sandhya to family, telling that Meher sent them for them.

Before Bittu could complain about Ranna and loss made by him, Kulwant told them that she knows about it. Kulwant and Yuvi proved that Bittu and Jeeto stole their company’s stock. She also scolded Ranna for his carelessness and asked him to give her 5 lakhs and office keys back.

People started avoiding Gills and refused to come to their house for Paath. Kulwant tried convincing Bittu and Ranna to work together to get successful in business. She handed over the business responsibility to both Bittu and Ranna.

Seher decided to do Keertan herself. She started the paath by singing melodiously. Sarab felt proud of his daughter. A tourist bus got punctured outside Gill Mansion. Hearing Seher’s voice many tourists joined Gills in Paath. Meher opened her eyes and woke up confused.

She thought where is she and why not in her house. She recalled her kids voice and got blurry visions of her family. Meher asked someone where is she. At hospital doctors asked Meher about her house and family. She felt difficult in recalling anything. Doctor told Meher that she lost her memory.

In the upcoming episode, tourists at Gill Mansion will think Sandhya to be Sarab’s wife and praise her, shocking everyone. Kulwant will too think to get Sarab married to Sandhya. Other side, some doctors will force Meher to get and sell her organs.

As per information from sources Meher will meet a little girl (new entry named:  Ananyapreet Satvinder Kaur) who will also be a patient in the hospital she is admitted to, See video:

Colors recently released a new promo of Choti Sarrdaarni, which showed that Meher will return and stop Sarabjit and Sandhya’s marriage. She will too propose Sarabjit for marriage. See Promo:

How will Sarabjit get out of this mess created by Raajan? Will this new entry make Meher recall Seher and her family?