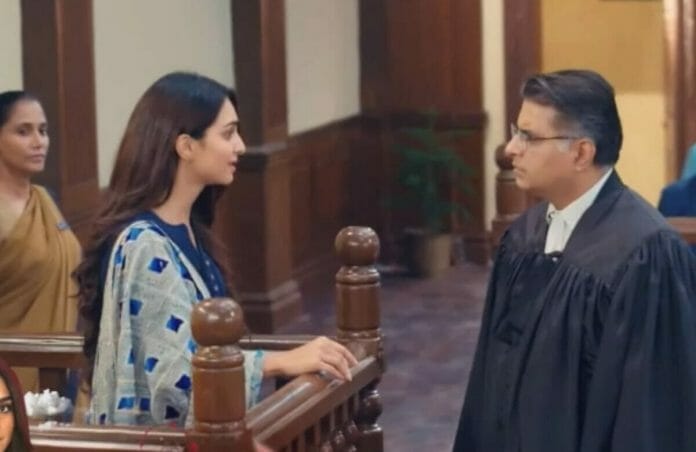 Colors TV’s recently launched show Dharam Patni is a rare love story of a simple sweet school teacher Pratiksha Parekh and a buisness tycoon Ravi Randhawa. Currently we are seeing that Ravi curses Pratiksha that she will always be alone like him. Pratiksha gets arrested. Jugni predicts that Ravi and Pratiksha’s story will be a legend. Pratiksha meets the car owner and Ankush in jail and doubts Malhar.

In the previous episode, Pratiksha tells Ravi that she didn’t kill Keerti and their last meeting was fantastic, they got to know more about each other. Ravi curses Pratiksha that she will always remain alone just like him and she will also not get her love like him. Pratik defends Pratiksha. Inspector shows the arrest warrant to Pratik.

Pratiksha tells Ravi that she is innocent, their meetings were nothing but coincidences. Ravi asks her how her earring reached Keerti’s accident spot. Pratiksha says that she hugged Keerti that day so her earring might left. Ravi doesn’t believe her. Hansa asks Malhar to save Pratiksha. Malhar says that he will do something. He feels thankful as he got saved. He thinks that he will not let Pratiksha stay in the jail for long.

Pratik tries to contact some influential persons to release Pratiksha from jail. Pratiksha meets the car owner and his employee in jail. She gets to know that Malhar took that car. She recalls Malhar’s behaviour on Keerti’s accident day and gets doubtful.

In the upcoming episode, In the court, Keerti’s father Gulshan asks Pratiksha about her earring in the accident spot. Pratiksha says that when she met Keerti last time, her earring might be left. Gulshan doesn’t believe her. He says that Pratiksha is lying. He calls her a liar and a cold blooded murderer.