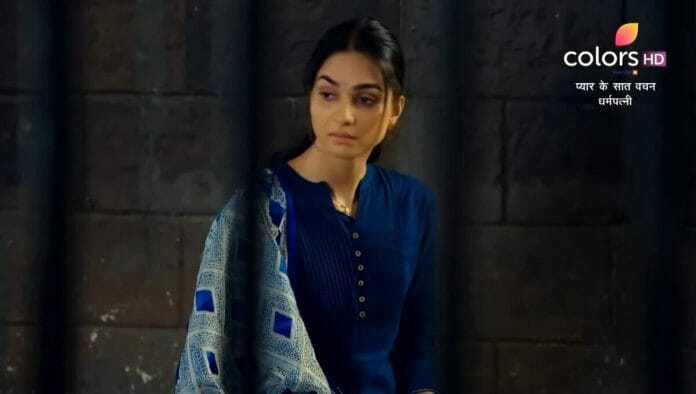 Colors TV’s recently launched show Dharam Patni is a love hate story of a simple sweet school teacher Pratiksha Parekh and a buisness tycoon Ravi Randhawa. Currently we are seeing that Ravi gears up to start Keerti Industries pvt Ltd. Kinjal gets a marriage proposal but rejects it. Malhar meets Raghu and asks for his help. Kavya tries to bring Ravi back in reality.

In the previous episode, Ravi’s father tells him about the automobile buisness which Ravi wanted to do much earlier. He gives the papers to Ravi and asks him to sign. Ravi sees Keerti Industries pvt Ltd is written in the document and says that he will sign on it immediately.

The guy who stopped Kavya proposes to marry Kinjal. Kinjal slaps him. Pratik meets Pratiksha. Pratiksha says him sorry and that she didn’t kill Keerti. Pratik says that he trusts her. He says that he is feeling helpless. Pratiksha asks him to not feel bad.

Ravi again meets Keerti in his imagination. Kavya brings him back to his senses. Ravi’s mother witnesses Kavya’s care for Ravi. Malhar meets Raghu to seek his help.

In the upcoming episode, Ravi says that he wants to see Pratiksha in pain. Malhar asks Raghu to do something so that Pratiksha can’t come out of jail. Gulshan gets Pratiksha transferred to another jail to get her killed. Pratiksha protects herself and decides to fight back.