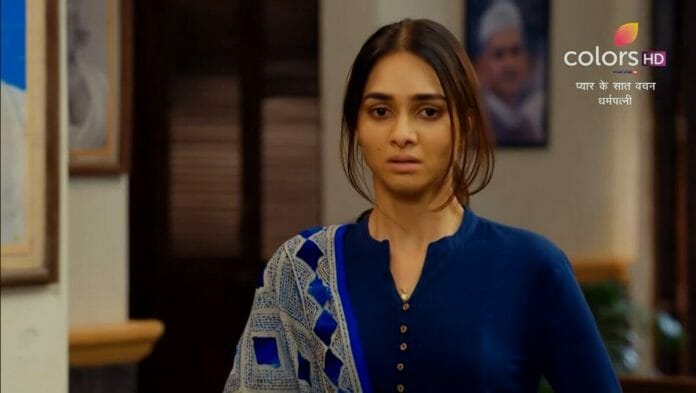 Colors TV’s recently launched show Dharam Patni is a love hate story of a simple sweet school teacher Pratiksha Parekh and a buisness tycoon Ravi Randhawa. Currently we are seeing that Thakur informs Malhar that Pratik is still alive and orders him to end his chapter forever. Hansa, Kinjal and Parul learn about Pratik’s accident. Pratiksha talks on the radio. Ravi hears her words and recalls Keerti.

In the previous episode, Pratiksha decides to fulfill Keerti’s unfulfilled dreams to make Keerti’s soul happy. Raghu sees that Pratik is not dead yet. Thakur calls him and asks him to end Pratik’s chapter. Raghu goes to kill Pratik but few passers by rescue Pratik.

Raghu leaves. Champa and Phuli call Pratiksha and tells her about radio night which is organised by the jail authorities for the prisoners. They ask Pratiksha to attend the radio night. Raghu informs Malhar that Pratik is still alive and asks Malhar to kill him.

Malhar calls Hansa to know about Pratik. He learns that Hansa is unaware of the accident. He decides to wait for Hansa’s call before taking any action. Pratiksha learns that many prisoners want to attend her classes. Champa and Phuli thank her and call her God’s sent. Kinjal attends Hansa’s call and learns about Pratik’s accident. They decide to visit the hospital.

Hansa calls Malhar and asks him to come to City hospital. On the radio show, Pratiksha talks about education and dreams. Ravi feels that the prisoner talks like Keerti. He decides to find her out.

In the upcoming episode, Thakur asks Malhar to kill Pratik. Pratik tells Malhar that he will tell everyone that Malhar has killed Keerti Sachdeva. Malhar suffocates Pratik to death. Hansa, Kinjal and Parul mourn for her death. Pratiksha decides to fight her own battle.