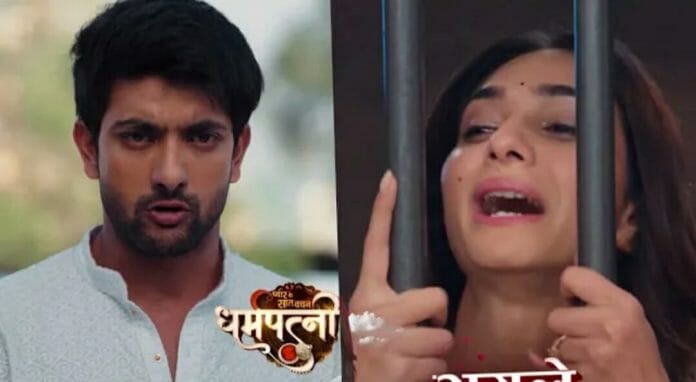 Colors TV’s recently launched show Dharam Patni is a rare love story of a simple sweet school teacher Pratiksha Parekh and a buisness tycoon Ravi Randhawa. Currently we are seeing that Ravi checks the CCTV footage and gets a clue about Keerti’s murderer. He suspects Pratiksha and goes to her house. Malhar bribes the car owner and asks him to keep quiet.

In the previous episode, Ravi reaches police station with Aditya. He wishes to check the CCTV footage. Inspector tries to stop him but cooperates later after getting commissioner’s order. Ravi checks the footage and spots Pratiksha with the wanted car. He sees that her one earring is missing.

He tells inspector that he found a similar earring at Keerti’s accident spot. He asks inspector to call Pratiksha for interrogation. Police refuses to do that as Pratiksha’s uncle is an influential person. Ravi leaves for Pratiksha’s locality. Kavya calls him and shows her concern. Ravi’s mother witnesses Kavya’s care for Ravi.

Malhar pays 5000 rupees to the car owner and asks him to not go for Car’s insurance so that there won’t be any record of accident. Hansa sends Pratiksha to feed curd sugar to Malhar. Malhar shows up in police uniform and boasts about his powers. Ravi reaches Pratiksha’s locality and finds her adress.

He reaches her house. Kinjal, Parul become happy seeing him. Ravi searches Pratiksha’s room and finds the jewlery set which she was wearing on her engagement day. He sees that one earring is missing from the set.

In the upcoming episode, Ravi confronts Pratiksha for killing Keerti. Ravi says that whoever it is he or she won’t be spared, Ravi himself will punish him or her. Pratiksha is put behind the bars. Kinjal, Parul cry for her. Pratiksha feels helpless. Malhar enjoys outside.