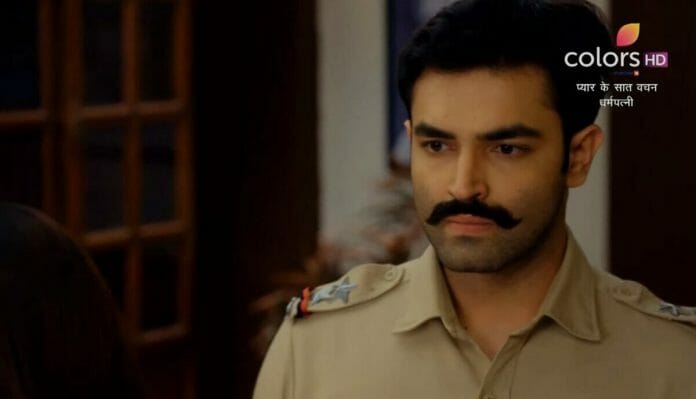 Colors TV’s recently launched show Dharam Patni is a rare love story of a simple sweet school teacher Pratiksha Parekh and a buisness tycoon Ravi Randhawa. Currently we are seeing that Pratiksha questions Malhar about his connection with Keerti’s accident.

Malhar acts clueless and tries to divert Pratiksha’s attention from the topic. Ravi misses Keerti and cries over his fate. Kavya tries to comfort him but fails.

In the previous episode, Malhar comes to meet Pratiksha. Pratiksha asks him to tell her truly what happened that day. Malhar acts clueless. Ravi drives car and recalls his last date with Keerti. Ravi tells that he misses Keerti and asks her to come back in his life. Malhar looses his calm and shouts at Pratiksha for doubting him.

He says that Pratiksha is deliberately trying to put all the blames on him. He by mistake mentions about Thakur and Raghu. When Pratiksha asks him about them he gives excuses. Malhar thinks that Pratiksha is very sharp and he should not mess with her at this stage.

He tells her that he is handling the case from now and he won’t let anything happen to Pratiksha. Ravi comes home and goes to his room. He makes the room dark and asks Keerti to come. Kavya comes there.

Ravi gets disappointed. Kavya tries to pacify Ravi but Ravi looks unaffected. He cries for Keerti and blames God and destiny from snatching Keerti from him. Ravi and Keerti’s parents feel bad seeing Ravi’s condition.

In the upcoming episode, Pratik tells Pratiksha that Malhar is an inspector now he will not let anything happen to Pratiksha. Thakur shows a video to Malhar and blackmails him. Gulshan interrogate Pratiksha in court.