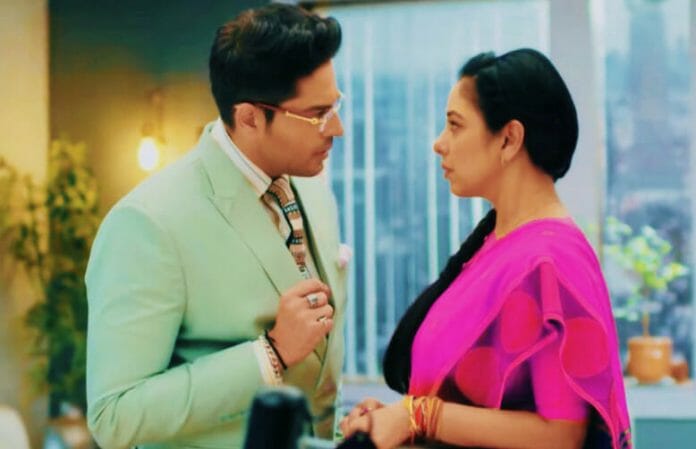 Anuj will decide to distance himself from Anupama

In today’s episode, Kavya stuns Leela in a model dress. She calls Kavya shameless. Hasmuk says even Pakhi wear short clothes. Kavya thanks Hasmuk. She tells to Leela about turning model. Vanraj says acting is also a profession. Leela gets unconvinced. She further asks Kinjal to have breakfast. Kinjal says since Paritosh left the job her workload has increased. Paritosh asks Kinjal if she will not wish him luck. Kinjal calls Paritosh’s idea useless.

Vanraj decide to drop Kavya. Leela says who will have her dhokala. Samar and Dimple comes and says they will eat. Leela asks Dimple where she is here. Samar says he called her because they have started morning batch for students. Dimple and Samar eats. Leela gets upset. Anupama dream about Anuj and dances. She romance with Anuj in her dream. Back to reality; Anuj returns back home. Anupama hugs Anuj and reads a romantic poetry for him. She confesses her love for him. Anupama gets shocked seeing someone standing on the door. She asks to switch on the lights. Dheeraj asks Anuj if he should come inside or should go.

Dheeraj says to Anupama that he too heard the poetry she wrote for Anuj. Anupama stands embarrassed. Anuj tells to Anupama about Dheeraj being his childhood friend. Dheeraj teases Anupama over romantic step up. Anuj asks Dheeraj to stop pulling Anupama’s leg.

In the upcoming episode, Anuj will share his pain with Dheeraj. He will say he is broken from inside. Anupama will fear losing Anuj. She will break down. Will Anuj, Anupama get separated? Time will only tell. Keep watching the show for more interesting twist and turn.