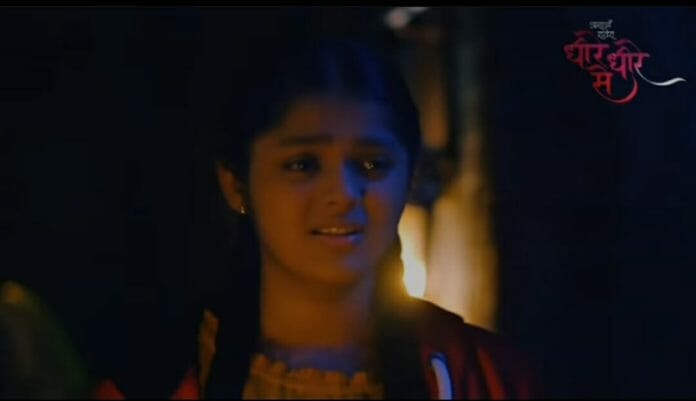 Star Bharat’s show Dheere Dheere Se is gearing up with an interesting drama with Raghav alerting Bhawana about the outcome of Barsati case through a message and hope’s the latter understands while Bhawana pays the lawyer’s fee and determines to win the case. Now it will be interesting to see what will happen next?

In the current track it shown that Bhanu asks Bhawana to think and choose her priority wisely because he can give her only fifteen thousand and leaves. Meanwhile Raghav gets worried recalling Brij Mohan and Vikas’s conversation and messes up Aarav’s project. Aarav notifies Raghav the same and the latter apologises for it.

Malini questions Bhanu the reason behind giving fifteen thousand to Bhawana as they already have expenses related to Abhishek’s marriage. Bhanu tells her that giving Bhawana fifteen thousand will help him earn praises from the society for taking good care of his late brother’s wife and daughter also he can take revenge from Bhawana for going against his wish to sell the Barsati but now she has no other chance but to agree with them though.

Meanwhile Raghav expresses his worry with Gaurav about the Barsati case. Gaurav says to him it’s better if they just follow Brij Mohan’s instructions nothing else. Swati tells Raghav his concerns are right but the Shastri’s has to sell the Barsati if they can’t fight legally.

She also thinks that she wants Raghav to help Bhawana which will land him a in a trouble. Later Raghav sends Bhawana a warning message when the latter is about to pay Vaibhav his fees. Bhanu and family gets shocked when Bhawana reveals she used the money to pay lawyer’s fee.

Bhanu scolds Bhawana for not caring about Aanchal’s happiness but Aanchal supports Bhawana saying with her consent only Bhawana took this decision which surprises the Shastri’s.

In the upcoming episode it will be shown that Bhawana and Raghav will arrive at the temple. Bhawana will say this is an important day because the verdict of the Barsati case may pass today then leaves.

Raghav will get shocked. Later in the court Bhawana will get worried not finding Vaibhav in his place and wonders who will support her now and looks on.