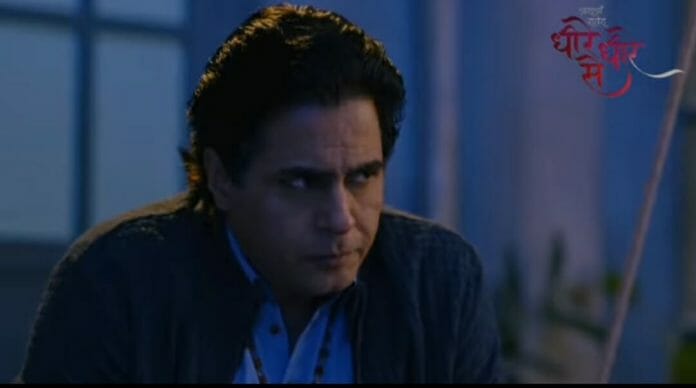 Star Bharat’s newly launched show Dheere Dheere Se is gearing up with an interesting drama with Bhawana warning Vikas for raising his voice against Jagjivan and Bhanu and later requests the police offer to find the culprit soon.

Now it will be interesting to see what will happen next? Will the Shastri’s learn about Bhawana’s lie? What will be the reaction of Bhanu when the truth about insurance money comes out? Will Raghav help Bhawana again?

In the current track it shown that Vikas says to the Shastri’s that he don’t want someone to enter in his house and loot the things so he is going to leave Poonam here. He also says the upstairs house belongs to him as he is staying here for more than ten years and the Srivastav’s are his lawyer who will definitely help him win this case and mocks Jagjivan and Bhanu.

Bhawana warns Vikas to not to behave this way with Jagjivan and Bhanu. She then prays God to send them a lawyer who can help them get their house back. The next day Bhawana advices Aanchal to not to worry about anything and focus on her studies, she will manage to send her to the school trip which makes the latter happy.

Later Bhawana receives a call from the police officer who asks her to come to the station to identify whether the one who fooled her is the one they caught. Bhawana agrees but worries how to leave the house. Bhanu praises Bhawana for her stand for them but asks her not to do this with the family members.

Manohar calls Bhanu and says that they should fix the engagement date of Abhishek and Meera which makes everyone happy. Bhanu then asks Bhawana to go and buy the things from the market Bhawana uses the opportunity to visit the station but gets upset when she see it’s not the one who fooled her the police arrested.

She requests them to find the culprit soon. Later Aanchal and Bhawana is on their way the latter feels dizzy and falls unconscious shocking Aanchal.

In the upcoming episode it will be shown that Bhanu’s brother will inform Vikas that they are willing to give him the upstairs room. Vikas will say Bhawana’s opinion also needed in this and asks her to tell her decision.

Bhawana will say that she won’t support Bhanu’s decision which will shock everyone.